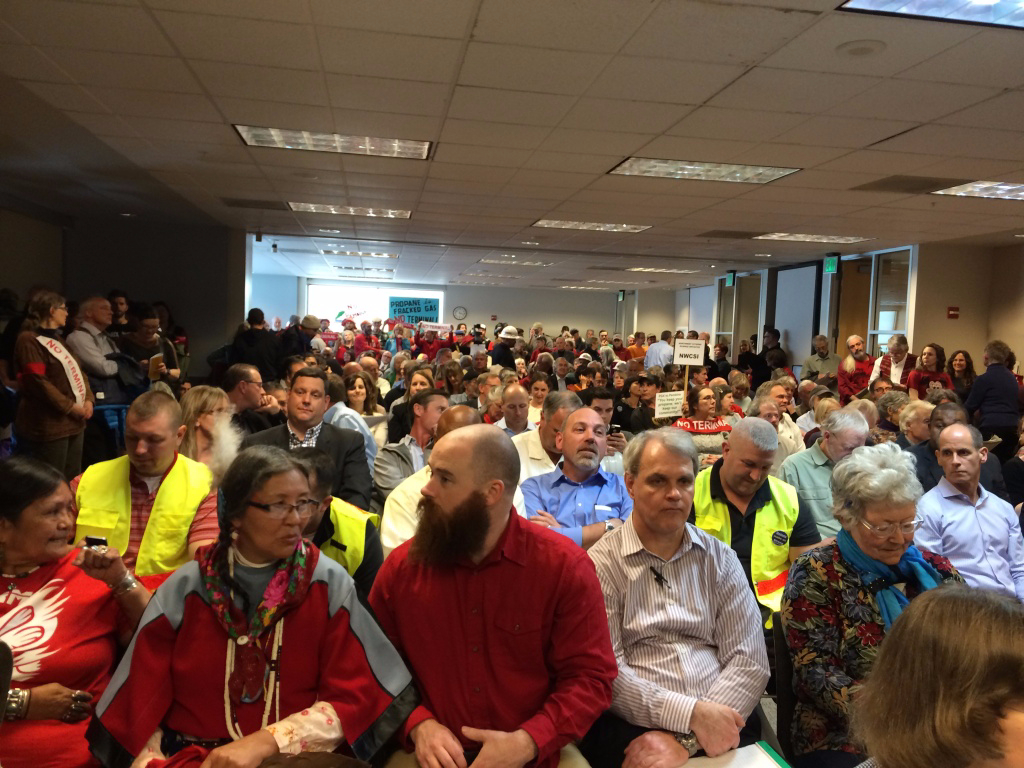 Hales assured us back in September, 2014 that the facility in the Rivergate industrial district would be “transformative”, yielding 600 to 800 construction jobs, up to 40 permanent jobs and paying $3.3 million in property taxes each year, recounts the Willamette Week.  “This is great news,” Hales extolled.

The Mayor’s sudden about-face followed months of overwhelming public opposition to the terminal, including a six-hour marathon before the Portland Planning and Sustainability Commission on April 7.  The Portland Mercury reported that “more than 300 activists showed up for the meeting, with representatives from neighborhood associations, Native American tribes, and environmental groups” to express concern and anger around environmental and safety issues. One overriding concern was that the terminal would fly in the face of  the city’s Climate Action Plan.  The commission, in a 6-4 vote, recommended supporting a proposed zoning change to accomodate the terminal, and sent the issue to Portland City Council for a final decision.

Whether Mayor Hales’ change of heart was motivated by political survival or genuine consideration of public opposition, he had already let the pigs out of the barn. Now Portland faces an uphill battle, one that both propane proponents and  the opposition are more than ready for.

Indeed, just hours after Hales’ declararon the project is “not a winner,” Pembina issued a press release stating that the company “reaffirms its plans to proceed towards next steps in the development of its proposed Portland Propane Export Terminal Project”.

Really? What happened to Pembina CEO Mick Dilger’s assurances that “if it turns out the people of Portland don’t want this, we don’t have a deal“.

And now, the Port of Portland doesn’t wanna take “No” for an answer: “The Port fully supports Pembina’s continued efforts to site a propane export facility here. The Mayor’s withdrawal of support for the proposed propane terminal … is surprising and disappointing…due to the Mayor’s early support, the company has spent $15 million to comply with various city regulations and requirements of the zoning change process.“

The City Council and the Port Commission will come to realize that there ain’t enough paint in this town to greenwash a 36,000 barrel-per-day fracked gas propane terminal on the Columbia.  Our job is to make it crystal clear that support of this terminal would be political suicide.

Charlie finally got the message. The rest of the City Council and the Port Commissioners are next.

The next hearing is June 10th. Please call and write the City Council today.