Skip to content
Join Portland Rising Tide in solidarity with Burnaby Mountain on Monday, December 15th at noon. Come dressed in your best lawyer garb or surveyor costumes and be ready for some fun theater antics as we deliver a message to one of our local climate criminals.
Meet at 12pm at the Gazebo at Peninsula Park, (N Ainsworth and Albina) to carpool to the location. We will return by 2pm.
In early September courageous and peaceful people re-occupied un-ceded xʷməθkwəy̓əm (Musqueam), Sḵwx̱wú7mesh (Squamish), and Səl̓ílwətaʔ/Selilwitulh (Tsleil-Waututh) territories in British Columbia, where climate criminal Kinder Morgan seeks to expand the TransMountain tar sands oil pipeline.
In an inspiring display of community solidarity, people from all walks of life came to Burnaby Mountain to stand up against Kinder Morgan as the company surveyed for test drill sites. Over 100 protesters were arrested on the mountain, defending the land and waters from oil industry greed.
On Dec 1st, the Burnaby community celebrated when Kinder Morgan packed up and left the area after a court ruled they could not continue to block protesters from entering the area.

Unfortunately, this victory may only be temporary. Kinder Morgan is in the surveying phase of this pipeline expansion and there is nothing stopping them from returning to construct the pipeline at a future date.

Kinder Morgan has left the land for now… Let’s let them know that the whole world is still watching!
Join us this week to show your solidarity with Burnaby Mountain and those fighting the fossil fuel industry

At 9:30 AM on December 17th, a representative of the Climate Action Coalition testify in opposition to the proposed propane export terminal at the Port of Portland  during the brief public testimony period at City Hall in front of the Portland City Council.  (Please note that this issue is not on the Council agenda and will not be discussed by the Council at this meeting).  We need a full room of supporters to amplify her voice!   Please RSVP to info@portlandrisingtide.org so we know you’ll be there. Include ‘Propane” in the subject line! Thanks!

Portland was recently awarded the title of Climate Action Champions. Despite this, Portland is on the verge of rolling back its environmental code along the Columbia River to allow a fossil fuel terminal to ship dangerous liquefied propane. Does this sound like a city wins presidential climate awards? Our city currently has a law that prohibits the transport of hazardous materials, like liquid propane gas (LPG) via pipeline through conservation zones like the sensitive riparian areas along the shores of the Columbia. This law has existed since 1989. Why change it now? A Canadian fossil fuel extraction and export company wants to ship dangerous liquefied propane from Terminal 6. Mayor Hales has already rolled out the red carpet for LPG, declaring “This is great news” in a public statement on the proposal. Fewer environmental protections and more carbon pollution; doesn’t sound like news.

Step One for Pembina is securing an environmental code amendment from the Portland City Council. This code amendment is being drafted by the Bureau of Planning and Sustainability right now (early December 2014)!  We need to pack the room opposing fossil fuel exports!

Dear Friends,
Thanks so much for making desserts, bringing friends and telling stories. We raised $553 on Thursday night and all of it is going to Portland Rising Tide to support NVDA and resistance to the fossil fuel economy! Yay!

BUT SERIOUSLY, EVERYTHING WAS AMAZING AND DELICIOUS!

Huge props to Mer for stepping up and telling a story after a last minute cancellation and the fellas (Tim and Justin) at Resistance Ecology for bringing stories from the world of animal liberation.

Celebrate tasty autumn treats and direct action all in one place! Continuing the longstanding NW tradition of directly confronting

Decades of resistance taught us our tactics and we’re bringing together direct action activists from throughout the years to share their stories with you. We’re also bringing you some of the best things that autumn can offer: pumpkin desserts!

How? $10 donation at the door gets you into the tasty action (a dozen dessert options!). Rank each dessert you taste on a scale of 1-10. Your ranking equals how much extra you’ll contribute for the dessert. The dessert that ranks the highest (a.k.a raises the most money) wins! A cash prize of $50 will be awarded to the winning dessert maker!! 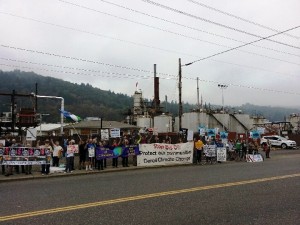 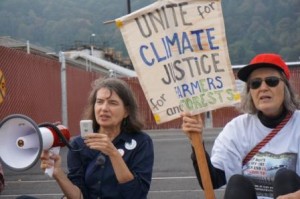 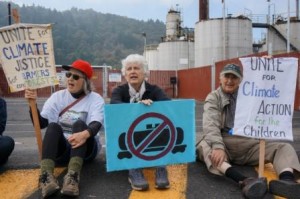 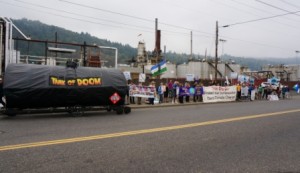 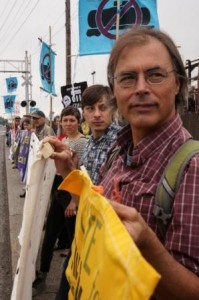 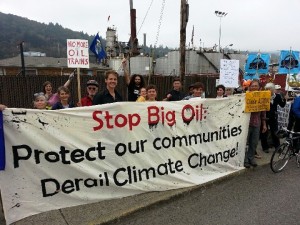 NW Portland: 100 people gathered in protest this afternoon at Arc Logistics, Portland’s only crude oil-by-rail terminal. Five activists risked arrest by sitting directly on the rail tracks to prevent an oil train from reaching the oil terminal. Information leaked from a worker at the facility revealed that due the controversial protest, oil shipments had been halted for the day. Protesters, including those blocking the tracks have dispersed peacefully.

Crude oil trains have caused a great deal of controversy across the county. Nearly a dozen derailments have occurred in the past two years, many ending in fireball explosions that have killed 47 people and caused hundreds of millions in property damage. Event organizers say these trains represent an unacceptable threat to our communities: risking explosive train derailments, dangerous spills and leaks, degrading air quality, and destabilizing the climate.

“I am an obstetrician, gynecologist with a degree in public health. I have devoted my career to protecting mothers and babies and worked internationally in almost 40 countries. I have taught at Harvard and Stanford. The importance of these efforts now pales,” said Kelly O’Hanley, MD, MPH, one of the five activists willing to risk arrest if an oil train attempted to enter Arc Logistics. “I have never gone to jail but the specter of climate change has moved me out of my clinic, out of the hospital and out of my comfortable living room – onto the streets and into jail if necessary.”

“Portland is a choke point for fossil fuel transport in the Northwest. We are drawing the line to support all those affected from extraction to the climate-destabilizing combustion,” says organizer Mia Reback, “today’s action is intended to send a strong message that the community will not allow these dangerous oil trains to come through Portland.”

Today’s protest continues a series of direct actions and resistance against Northwest oil-by-rail projects. In June, activists with Portland Rising Tide blocked the Arc Logistics site in Portland when a woman locked herself to a concrete filled barrel on the tracks. Following that action, community members across the Northwest have set up blockades at oil facilities in Anacortes, Washington, Everett, Washington and most recently Port Westward, Oregon.

Arc Logistics currently ships crude by rail from fracked oil shale in Utah. The first US tar sands mine is under construction in Utah and Arc could soon be accepting this controversial fuel. The Arc Logistics terminal can also receive explosive Bakken crude oil from North Dakota without notifying Portland residents.

The Climate Action Coalition demands that the city of Portland halts the operations of Arc Logistics and imposes a ban on all new fossil fuel infrastructure that puts our climate and communities in jeopardy.