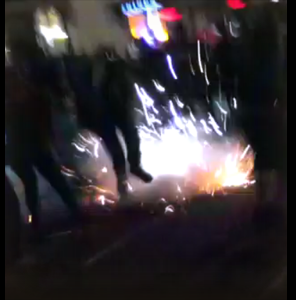 On Tuesday, November 25, the day after the grand jury decision in the Michael Brown case, Ferguson residents focused on cleaning up from a night that involved both peaceful protests as well as smashed windows, stolen goods and burned buildings.  Missouri Gov. Jay Nixon ordered additional National Guard troops into the city.  As Ferguson smoldered, massive actions continued daily in cities across the nation with thousands of participants and hundreds more arrests by all accounts.  In the next wave, activists took aim at Black Friday, turning out at top retail outlets to express outrage against a grand jury decision not to indict a police officer for killing Michael Brown, an unarmed teen.

On Monday, December 1, thousands of people took part in Hands Up Walk Out actions as participants left their jobs and classes across the country.   This protest took place at 12:01 p.m. Central time — the time Brown was killed on August 9 — with events planned in more than 30 cities in the U.S. and abroad, according to activists.

On Saturday night in Portland, Oregon at least 400 attended the rally dubbed DON’T SHOOT PORTLAND, reports rt.com.  The event was created on Facebook under the hashtag #DontShootPDX.  Portland Police met the peaceful protests with flash grenades and arrests of at least ten activists.  Saturday night’s march marked nearly a week of demonstrations, in Portland and across the nation. Monday, December 1st, was the seventh day after the decision, and #DontShootPDX was at it again on in front of Portland City Hall…more soon.

An emerging issue that has exacerbated police violence targeting communities of color is the increasing militarization of US state and local police.  And despite the US Government’s proclivity for tracking statistics of every type, there is still no reliable national registry of police shootings or victims.  The Department of Justice  Arrest-related Deaths  database includes only self-reported information from about 750 law enforcement agencies. Portland police shootings have been tracked by  Portland Cop Watch.

Demands for police accountability will continue to grow across the country.  Portland Rising Tide will continue to support non-violent direct action for racial justice and against state violence. We believe that the struggle for social justice is inextricably linked to the fight for environmental justice. We believe that capitalism, racism and patriarchy are among the root causes of social and environmental degradation.

Rising Tide North America’s statement of solidarity with Ferguson can be read  here.