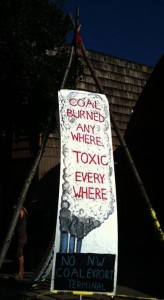 Of the six coal terminals proposed for Oregon & Washington, three have been derailed, as proponents face unprecedented opposition from business owners, public health professionals, elected officials, farmers, conservationists, and many others.

RT is highly encouraged by the apparent demise of these proposals, but we remain vigilant as we have heard that there may be more to zombie coal terminals than mere whispers on the lips of village witches.  And coal executives have stated openly that they are “are still looking at options in the Pacific Northwest”.  A summary of the defeated proposals can be found here.

Meantime! As of December, 2013, three coal export terminal proposals remain to be defeated.

The following was sourced from Earthfix, June, 2012 and is updated regularly.

1)   Morrow Pacific: Ports of Morrow and St. Helens, OR

This two-port plan would bring coal by rail to the Port of Morrow in Boardman, OR. There it would be transferred by barge, delivered to Port Westward and loaded onto ships headed for Asia. Both terminals along the Columbia would encroach upon sensitive salmon habitat.  In particular, the terminal at Port Westward could stack huge barges in Bradburry Slough, a prime salmon spawning area that the State of Oregon has spent millions of dollars to restore. This proposal if approved would double barge traffic in the river at full build up, impeding the transportation of other commodities, tribal and commercial fishing, as well as recreational fishing, boating and parasailing.

What’s Next: The Oregon Department of Environmental Quality is processing two permits; water pollution and air quality for the Boardman Facility.  Public hearings for the permits were held on July 9, 2013.  The DEQ’s public comment period was extended to August 12, 2013.  The Oregon Department of State Lands (DSL) was set to decide Sept. 1, 2013 on a wetland fill removal permit at the Port of Morrow, but the DSL has granted Ambre an extension until April 30, 2014 to complete their application for the permit.  Governor Kitzhaber heads the State Land Board, the decision-making body for the DSL, and can instruct the DSL (as well as the Department of Environmental Quality) on permit approval and denial decisions.  So far, the Governor talks the talk but has yet to take a decisive stance against the Ports or the fossil fuel industry.

Portland Rising Tide and allies paid a visit to the SLB at a meeting in October. Comments are available online. The Army Corps of Engineers is conducting an environmental assessment, which is less thorough than an environmental impact statement would be.

A $640 million terminal that would eventually export 44 million tons of coal/year at a private brownfield site near Longview, WA. It’s a joint venture of Australia’s Ambre Energy and Arch Coal, the second-largest coal producer in the U.S.  A record-busting 164,000 comments were received by the Washington State  Department of Ecology and the Army Corps of Engineers during the site scoping period which ended November 18, 2013.

What’s Next: The Washington Department of Ecology (ECY) , Cowlitz County, and the Army Corps of Engineers (USACE)  are conducting an environmental review of the project.  Scoping hearings were held through Oct 17, 2013 and  164,000 comments were submitted through November 18, 2013.  More information here.

Seattle-based SSA Marine wants to build a terminal within the Cherry Point Aquatic Reserve. It would ship millions of tons of coal from Montana and Wyoming to Asia. The company says it would create thousands of jobs and generate millions in tax and other revenues.

What’s Next: Army Corps of Engineers and the Washington Dept. of Ecology (ECY) received public input Sept. 24 through Jan. 21, 2013.  Hearings throughout Washington and online interaction drew more than 124,000 public comments which are available from ECY here.  An informal review of public testimony by RT indicates an overwhelming majority of the public is in opposition to coal terminal development.  Agencies will issue an environmental impact statement and from here, and approve or deny development permits.