What are the Tar Sands?

The tar sands are deposits of solid-state petroleum – called bitumen – which are found underground intermingled with sand, clay and water.  Bitumen is extracted by massive open-pit mining or sub-surface steam injection, resulting in higher water and energy use, and three times the carbon emissions, than in regular crude oil production.1   For much of the 20th century, these deposits were largely ignored by oil companies due to the high costs associated with extraction and production.  Now, because of dwindling production of conventional petroleum sources, every major oil company in the world is investing in tar sands extraction.2 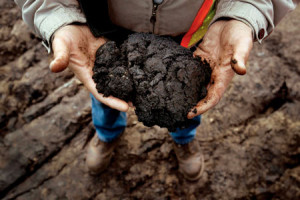 Where are the Tar Sands?

Bitumen deposits can be found all over the world, however most of these are too small or inaccessible to make development of these sites feasible.  The bitumen deposits underlying Alberta, Canada’s taiga forest stretch across an area roughly the size of Florida and are speculated to contain the world’s second largest deposit of commercially recoverable oil.  Extraction in the Alberta tar sands constitutes about 90% of the world’s “unconventional oil” industry. 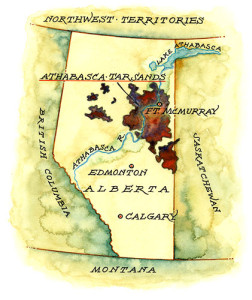 The tar sands have been called the largest, most destructive industrial operation on the planet, ever.3 In the midst of a changing climate and dwindling biodiversity, expansion of the tar sand industry is a step in the wrong direction if we are to develop a sustainable human existence. Tar sand mining irreversibly destroys landscapes, threatens the health of whole watersheds, negatively affects human communities, and accelerates climate change through greenhouse gas emissions and deforestation.

How do the Tar Sands impact the land?

As a result of tar sands mining, Alberta’s vast expanses of pristine, old-growth taiga (aka boreal) forest are suffering the second fastest rate of deforestation in the world. Bitumen is located deep underground and is too thick to be pumped to the surface by traditional means.  In pursuit of profit maximization, oil companies clearcut the forest and dig the bitumen up using strip-mining techniques, such as those used in the coal industry’s mountaintop removal mines.  The timber is sold, pulped, burned or otherwise disposed of, along with several meters of peat moss (which any home-gardener can tell you is the richest, and rarest, soil-type there is) and every other living thing in the forest.  As the forest-scape surface removal often reaches depths of several hundred feet, this form of form of strip-mining offers not even a token chance of forest recovery.  Bitumen extraction thus leaves a lifeless moonscape where once there was a lush green wilderness.

How do the Tar Sands impact the water?

Tar sand operations use extraordinary volumes of water, which they get by diverting the Athabasca river, a glacier-fed waterway which flows into giant Lake Athabasca, joins the Mackenzie River system and, eventually, empties into the Arctic Ocean.   For every barrel of oil produced at the mines, an average of three barrels of water are sucked out of the Athabasca river.4  Firstly, the water is superheated with natural gas and injected underground to make bitumen viscous enough to be pumped to the surface.  The extracted bitumen is then spun with more water and a chemical solvent to remove clay and minerals, leaving the remaining wastewater to be dumped into enormous toxic “settling ponds”, so large they are visible from space.  This process results in a localized cluster of tar sand facilities using as much water as the city of Calgary (population ~2 million). Up to half of the water extracted becomes so oily and toxic that it can never be excusably returned to the river, and the “”settling” process, so far unproven, is expected to take several decades to complete, if ever.  More than five million gallons of this waste-water leaks out of the ponds and back into the river or groundwater annually. In communities downstream that have seen spikes in environmental red-flags such as mutations in wildlife and rare cancers among humans, the once pure Athabasca River is now considered poisonous and off-limits to drinking. 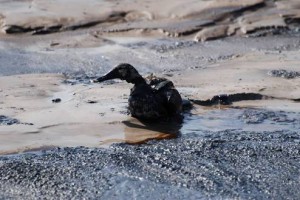 How do the Tar Sands impact the atmosphere? 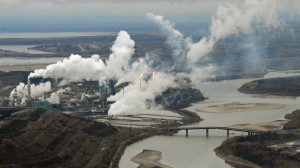 An aerial view of the Suncor oil sands extraction facility on the banks of the Athabasca River in Alberta, Canada, in 2009. Scientists say contaminants found at the bottom of lakes in Alberta are from air pollutants from the facilities responsible for producing and processing tar sands oil.

3. “Canada’s tar sands, deposits of sand saturated with bitumen, contain twice the amount of carbon dioxide emitted by global oil use in our entire history. If we were to fully exploit this new oil source, and continue to burn our conventional oil, gas and coal supplies, concentrations of carbon dioxide in the atmosphere eventually would reach levels higher than in the Pliocene era, more than 2.5 million years ago, when sea level was at least 50 feet higher than it is now. That level of heat-trapping gases would assure that the disintegration of the ice sheets would accelerate out of control. Sea levels would rise and destroy coastal cities. Global temperatures would become intolerable. Twenty to 50 percent of the planet’s species would be driven to extinction. Civilization would be at risk.” – Game Over for the Climate