OPB– Aaron Kunz,  September 20, 2013 – BOISE, Idaho — Climate change and fish protection should be top considerations when the United States and Canada renegotiate a treaty over how the neighboring countries should manage the Columbia River.

That’s the recommendation of U.S. regulators in a new draft issued Friday. The treaty is a half-century-old agreement controlling the Columbia River’s flow between Canada and the United States.

The draft proposed for the Columbia River Treaty went public, giving citizens and interest groups a chance to comment before it goes to the U.S. State Department in December to present to the Canadian government.

It includes key environmental provisions to address concerns that weren’t anticipated when the original treaty was adopted in 1964. Since then, 13 species of salmon and steelhead have been listed for protection under the Endangered Species Act in the U.S. portion of the Columbia, which is the fourth biggest river in North America.

— Four more hearings are scheduled for $643 million project, including one in Vancouver —

About 2,000 people jammed into the Cowlitz Expo Center on Tuesday evening, capping six hours of hearings on a proposed Longview coal terminal in which both sides rallied vigorously but without the incivility law enforcement officials had feared.

With opponents dressed in red and supporters donning blue, the Expo Center resembled a mixed-party political convention, with the reds, many bused in from outside the area, having a decided majority.

Outside, a sign on a 12-foot-tall inflatable globe declared “Coal is poison,” and a majority of people shared those sentiments when they urged state, federal and Cowlitz County regulators to conduct a broad environmental review of a $643 million Millennium Bulk Terminals proposal to export 44 million tons of coal annually at the old Reynolds Metals site.

SEATTLE — The Native American tribe that has blocked a narrow highway running through the central Idaho wilderness in order to stall a load carrying equipment to the tar sands in Canada has announced they have turned to a different tactic: a lawsuit.

The Nez Perce tribe announced that it had a filed suit demanding that federal wildlife officials halt the so-called megaload — reportedly stretching over 200 feet and weighing about 644,000 pounds — and prevent others like it.

Since Monday, members of the tribe have stood on Highway 12 each night to form a blockade as the shipment tried to move through. At least 20 people have been arrested, according to local authorities.

Tribal officials said they decided to file the lawsuit — in conjunction with the group Idaho Rivers United — after they believed they had “been left with no other option.”

The Columbian – Aaron Corvin, August 12, 2013 —  The Washington state Auditor’s Office is reviewing a complaint filed by a Vancouver resident about the Port of Vancouver’s decision to bar the public from a discussion of a controversial proposal to build the Pacific Northwest’s biggest oil terminal.

The auditor’s office said Monday it received the complaint on Aug. 8 through its citizen hotline, a system set up to improve efficiency and accountability in state and local governments.

The complaint concerns the questionable use of executive session by port Commissioners Jerry Oliver, Brian Wolfe and Nancy Baker during a July 22 special public meeting to discuss broad elements of a lease with Tesoro Corp. and Savage Companies. The companies want to handle as much as 380,000 barrels of crude per day, hauled by train from the Bakken site in North Dakota.

SALMON, Idaho – Police arrested 19 members of the Nez Perce Tribe on Tuesday on suspicion of disorderly conduct for refusing to break a human chain blocking a highway in Idaho in protest against a 322-ton load of equipment bound for the tar sands of Alberta, Canada.

The blockade by more than 250 mostly Native American protesters halted travel of a so-called megaload for two hours on a scenic roadway at the front lines of an ideological struggle over North American oil and gas development and its impact on the environment, local communities and native cultures.

The Nez Perce said they staged the protest to oppose the shipment of massive oil refinery equipment along wild stretches of two prized Idaho rivers, the Clearwater and the Lochsa, and through Nez Perce and protected federal lands.

The 19 Nez Perce activists who were arrested by tribal police on Tuesday were later released on bail, authorities said. The megaload resumed its journey after the protest.

Nez Perce Chairman Silas C. Whitman said in a statement that tribal leaders were against “the conversion of this wild and scenic area into a high and wide industrial corridor.”

The load, which measures 255 feet long, 21 feet wide and 23 feet tall, is one of two planned shipments by an Oregon hauling company, Omega Morgan, of a water purification unit being trucked to Alberta production fields, according to an Idaho transportation permit issued on Friday.

The route along U.S. Highway 95 and U.S. 12 follows a historic trail broken by early Nez Perce bison hunters and used in the early 19th century by Meriwether Lewis and William Clark on a government-sponsored expedition that charted the newly purchased American West.

Megaload opponents say the oversize trucks may impair the visual and ecological values of the trail and a river corridor that supports threatened steelhead and Chinook salmon and fuels a tourist economy tied to rafting, fishing, camping and hunting.

The Omega Morgan load, which will take four nights to cross Idaho into Montana, was approved by Idaho over the objections of environmentalists and despite U.S. Forest Service concerns.

“This is a quiet, winding mountain highway through a beautiful river canyon, not an industrial park,” said Kevin Lewis, conservation director of Idaho Rivers United.

The Forest Service had sought to stop the shipment pending a study of its social, economic and ecological impacts.

“What are we going to stop next? We have to have commerce in this country,” he said.

Saturday we drew the line. On July 27th, some 800 people came together from across the region including Vancouver (WA), the Tri-Cities, Astoria, Eugene, Bellingham, Vancouver (BC), Seattle, Portland and Hood River to demonstrate our unity in opposition to the oil, coal and gas terminals proposed throughout the Northwest and our commitment to take action such that none shall pass through our region.

Hundreds attended workshops in the morning and we heard from speakers organizing against coal, oil and gas terminals in Portland, Vancouver (WA), Bellingham, Vancouver (BC) and the lower Columbia estuary. Then hundreds took the to water and the bridge to create a symbolic blockade of the river and to demonstrate our readiness to prevent these terminals from being constructed. In a surprise addition to the action a huge banner was dropped reading “Coal, Oil, Gas / None Shall Pass”.

We gathered on the Columbia because our communities and our climate cannot afford any expansion in polluting fossil fuel infrastructure. We took action Saturday because we know it is our moral responsibility to take a stand and halt projects that aim to turn the Pacific Northwest into a dirty fossil fuel corridor. Our region is poised to play a pivotal role with projects that would allow the burning of enough fossil fuels to have three times the impact as the Keystone XL pipeline. And if we stop these terminals that means they can’t ship it. And if they can’t ship it, they can’t sell it. And that means it stays in the ground.

Saturday was just a beginning. We symbolically blockaded the river to demonstrate our willingness to participate in nonviolent civil disobedience and direct action to prevent these terminals from being constructed should they move forward anywhere in our region. I hope you feel like Jeanne Poirer, from Cashmere, Washington who stated to the Oregonian, “I’ll be back for the real thing”.

If you are interested in learning more about participating in nonviolent civil disobedience and direct action please let us know by filling our this short form: https://portlandrisingtide.org/2013/07/nvda-sign-up/

It was inspiring to be with all of you who were present on Saturday. We could also feel the presence of the thousands of you who weren’t able to join us. We are mobilized and united as a region against these fossil fuel terminals. We are committed to taking action to address the climate crisis. Together we can stop them!

Media and write-ups about Saturday: 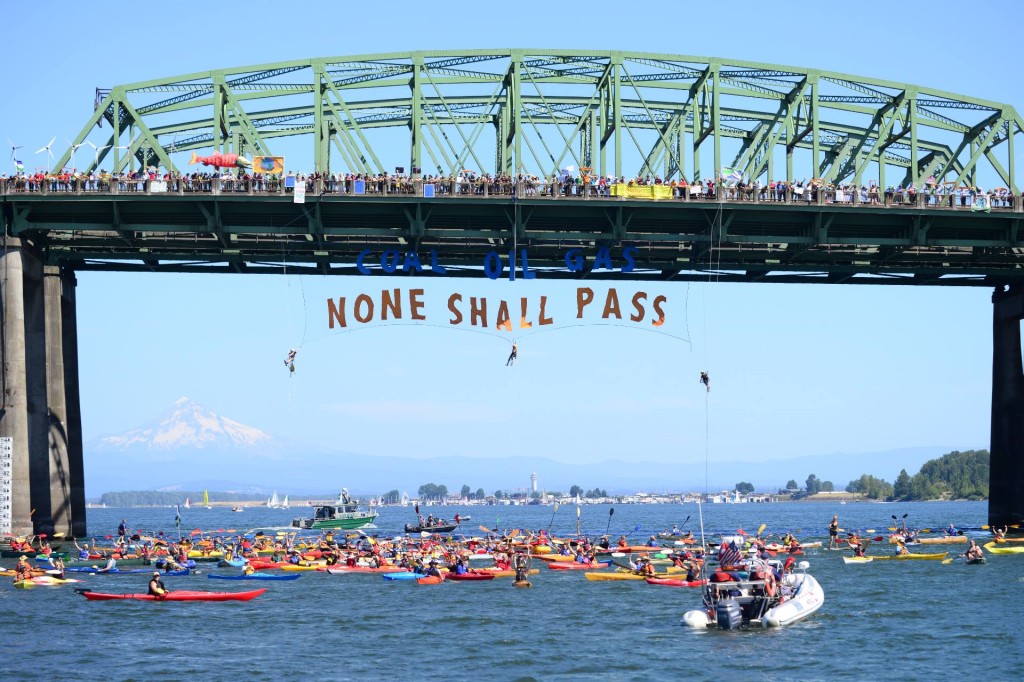 The Columbian– Aaron Corvin, July 23, 2013 –  The Port of Vancouver held a public meeting on Tesoro’s proposal to build the largest crude oil terminal on the west coast. Thanks to all who voiced  fierce opposition to the proposal. On the following morning, Tuesday, July 23,  Port Commissioners voted unanimously to approve the plan.

“The commissioners’ decision was a first step in determining whether the oil terminal — which would handle up to 380,000 barrels of crude per day from the Bakken oil shale formation in North Dakota — will get built. …The Tesoro-Savage proposal must (now) undergo an examination by the state Energy Facility Site Evaluation Council, which would make a recommendation to Gov. Jay Inslee, who has the final say” wrote the Columbian.

“With their action Tuesday, port commissioners underscored the fact that Vancouver has become an epicenter of global energy market gyrations and national environmental concerns”.

“Moments after the commissioners’ decision, opponents issued a news release saying they’ll turn out hundreds of people in Vancouver this Saturday as part of a national series of protests against building fossil-fuel infrastructure in the Northwest”.

A deadly oil-train explosion in Quebec has given pause to Port of Vancouver commissioners in southwest Washington. They want to rethink their next move with a proposal for a terminal to move oil from trains onto ships.

The port commission was set to vote July 23 on the largest train-to-ship oil transfer terminal proposed for the Northwest. That vote is still scheduled, along with a public hearing the previous day. But the outcome could be different than previously expected.

Port commissioner Brian Wolfe said Wednesday he now wants to extend the negotiation period with the oil-terminal developers to give the commission more time before voting on whether to approve the lease for the oil-train terminal. More here…

by Ashley Hearn for OPB Earthfix

More in the Columbian

Army Corps decision to not do an area-wide EIS for coal export terminals.

The effects of global warming will not be considered.

Comments for the Morrow Pacific terminal are due July 9th.

After signaling its disinterest in exporting dirty coal overseas, the Port of Vancouver is poised to take on the shipment of another dirty fossil fuel – crude oil.  On Thursday, June 27, the Port held a key meeting to consider the proposed oil terminal. Riverkeeper and other concerned citizens attended the meeting.

Read Riverkeeper’s top 7 reasons why this oil terminals is a bad idea.

­WHAT: Port of Vancouver Public Meeting about proposed Tesoro/Savage oil terminal. Public input will be allowed, likely at the beginning of the meeting.

More info coming soon about plans for the Port of Vancouver Oil Terminal and future actions and meetings.