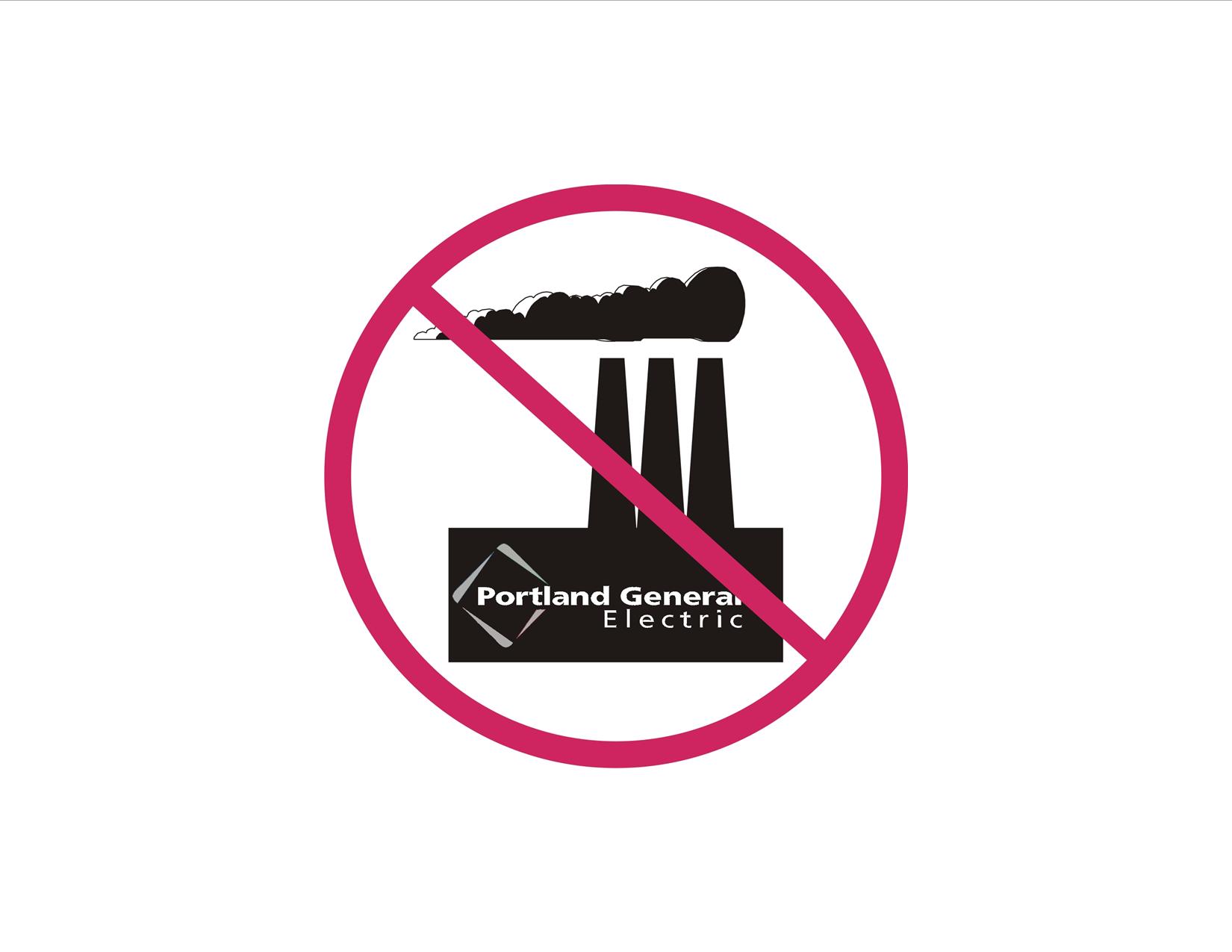 The battle against fossil fuel infrastructure in the Pacific Northwest rages on! In the face of last year’s historic Clean Electricity and Coal Transition Act, which mandates the closing of all in-state coal plants by 2020, Portland General Electric (PGE) is rolling out a plan to keep the PNW locked into fossil fuel power for the next 30+ years. Ignoring vast potentials for renewable energy, PGE is instead proposing to build two new gas-fired power plants as we phase out coal-generated power. If built, the Carty-Boardman generation station would be Oregon’s new largest source of climate pollution. We want Oregon to be powered by clean, renewable energy, NOT dirty fossil fuels.

The fossil fuel industry wants to argue that fracked gas is a bridge fuel to an imagined clean energy future, but we know that it’s only a bridge to further climate devastation. A number of groups are joining forces to demand that PGE replace coal power with 100% renewable energy. Come hear from the Climate Action Coalition, 350PDX, the Sierra Club, Portland Rising Tide, Greenpeace and Oregon Physicians for Social Responsibility in building a popular campaign to resist the fossil fuel industry and to build a climate justice future. 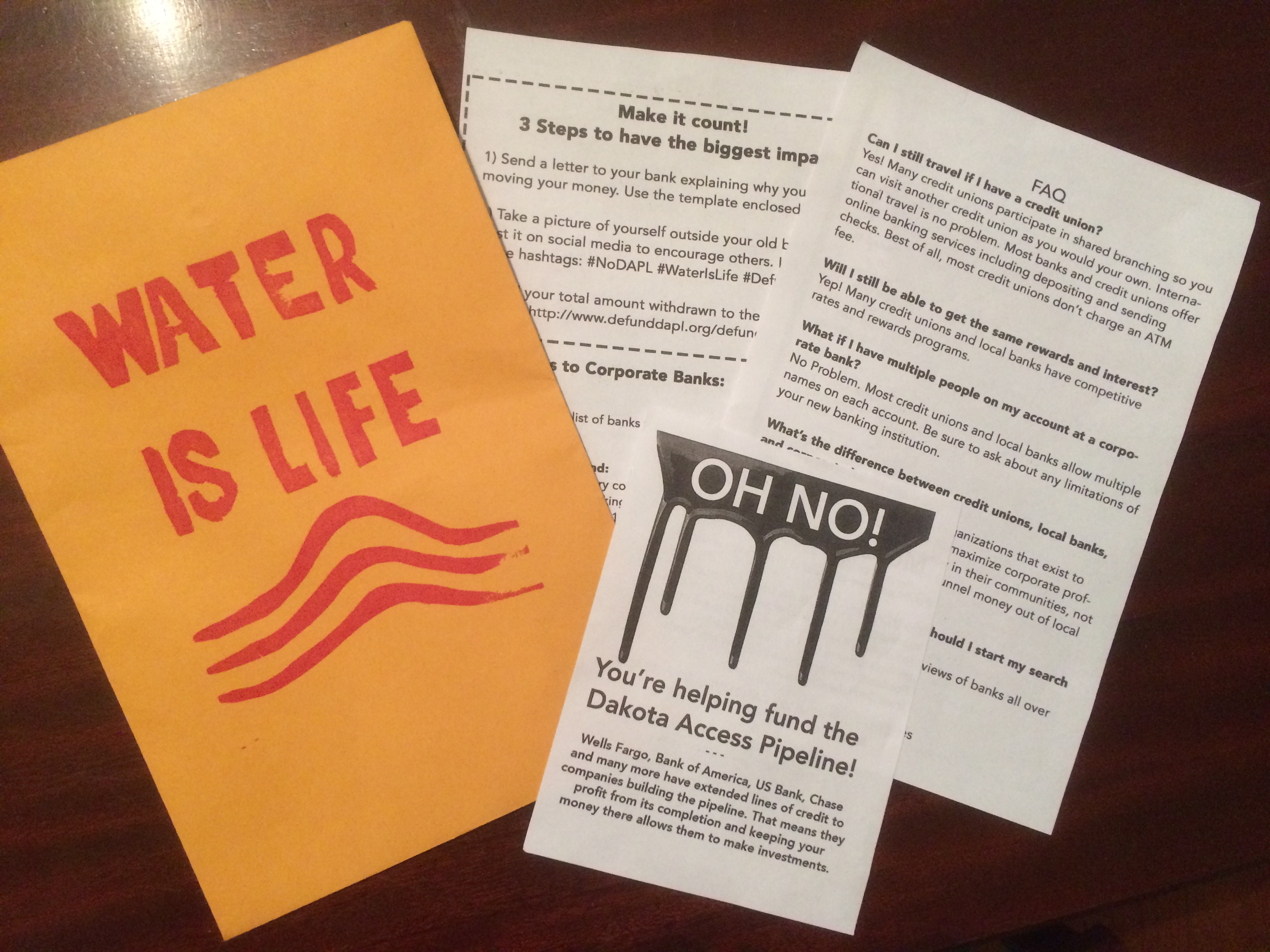 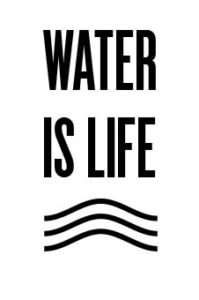 On Thursday Jan 26th at 2pm, join Portland Rising Tide for Round 3 to DEFUND DAPL! We are spending a day getting as many Portlanders as possible to take their money out of banks that fund DAPL. There will be cocoa, talking to strangers, and the merry jingle of the sounds of oil corporation bankruptcy.

We’ll meet up at the Rising Tide office, go over the strategy and then at 2:30 we will leave to fan out to as many different banks that fund DAPL as possible. Armed with tastefully designed “move your money” info packets (provided at the office), we will stand outside the banks, or on busy intersections or parks, in pairs or small groups and ask folks banking there to move their money to a credit union or local bank that doesn’t fund fossil fuels. The goal is to have as many personal conversations with folks as possible and leave with new friends! After banks close we’ll meet at The Standard Bar (on 22nd & Burnside) for a tasty beverage and a debrief.

-Warm clothes, snacks and water.
-Anything else you need to be comfortable standing outside for a few hours.
-A buddy if you’ve got one!
-Treats to entice strangers to talk to you (optional)
-A sign related to NODAPL (optional)
-Musical instrument (optional)

If you can’t join at 2, check back here and we will post places for people to join in throughout the afternoon.

Can’t make it to the event on Jan 12th? Print out your own Move Your Money Packets and host your own event! There are two versions of the packets available. One version has Portland specific information, and the other can be used anywhere in the country. Please share this resource! 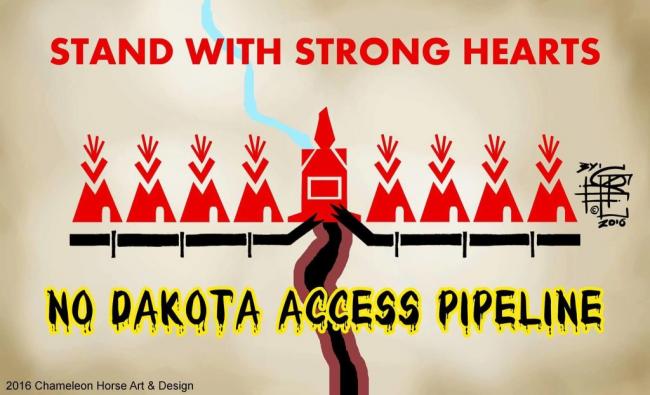 Help build winter shelter for the water protectors at Standing Rock!
We are retrofitting a bus and building some tents to send to folks on the frontlines in North Dakota.  Learn more about and donate to the cause.  If you are money poor but material or time-rich, consider donating materials and/or volunteer labor.  To donate, please contact: Mike at 503-515-5209 or Harlan at 971-227-0478
A list of materials needed include:

CLDC’sprojects educate people about their rights and why their rights are important. We defend front-line activists and expose and confront the persistent erosion of our civil liberties and the Bill of Rights. We believe that knowledge is power. When people have the tools and understanding to take action and demand that the government honor all their rights, then grassroots activism will be the best chance of exacting necessary change. CLDC educates, supports, and defends grassroots activists.

To see why we’re cooking and serving, please click here.

-Steve “Chezz” Cheseborough will perform 1920-30s roots/blues.
-CLDC’s Charles Denson will be on hand to talk about CLDC’s work.

Please RSVP, so we’ll know how many folks we’ll be feeding. 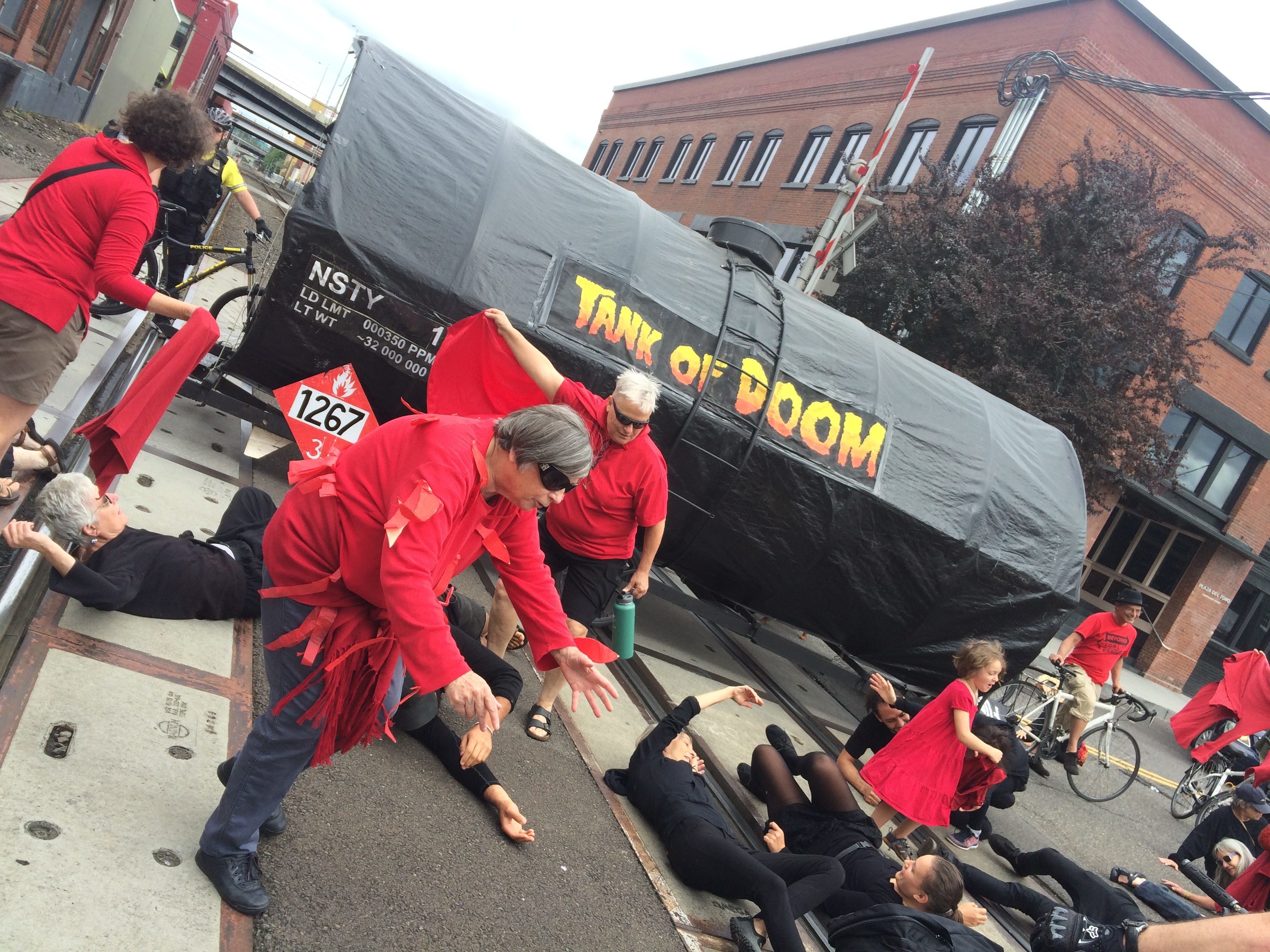 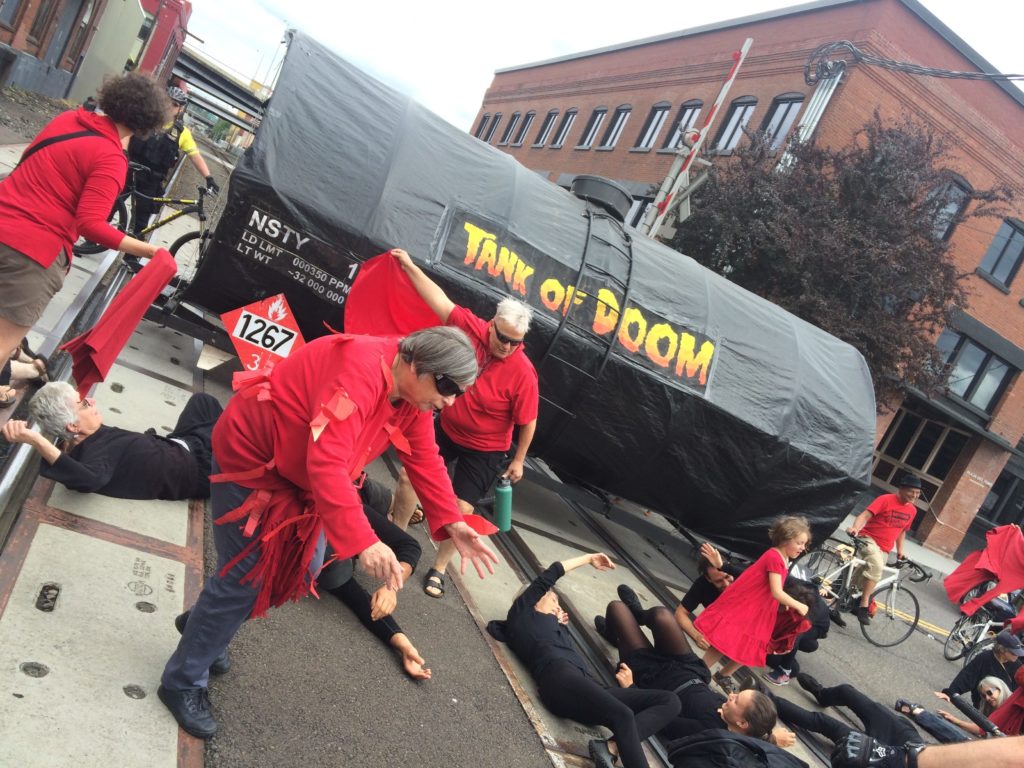 Portland, OR — The fledgling Fossil Fuel Resistance Network (“FERN”) orchestrated a street theatre flash mob on Saturday to stand up to railway and oil corporations which continue to put our communities at risk of climate change and oil train explosions.

With more than 50 participants, those dressed in black fell to the ground and made gurgling noises as they spilled from the Tank of Doom. Those wearing red danced around them, waving scarves and shouting “Burn! Burn!”.  The performance was repeated several times as participants snaked through SE Portland’s industrial area– including one performance atop the railroad tracks near Water Avenue and SE Taylor St. Portland police responded with bullhorn threats of arrest until the group disbanded from the tracks, heading to the OMSI Science Center.

For obvious safety concerns, FERN representatives notified Union Pacific (UP) prior to the performance that the tracks would be blocked.

UP, which owns the tracks along the targeted corridor in SE Portland, resumed oil train traffic through the Columbia Gorge in June despite being found “solely responsible” for the June 8 derailment and explosion in Mosier, OR, and despite requests from Oregon and Washington state officials for a moratorium pending further investigation and public input.

Communities all along these blast zones are asking for protection from future disasters. FERN is an open and inclusive organizing body that is rising to meet this call.

Nice work, FERN! We’ll catch you at the next block party… 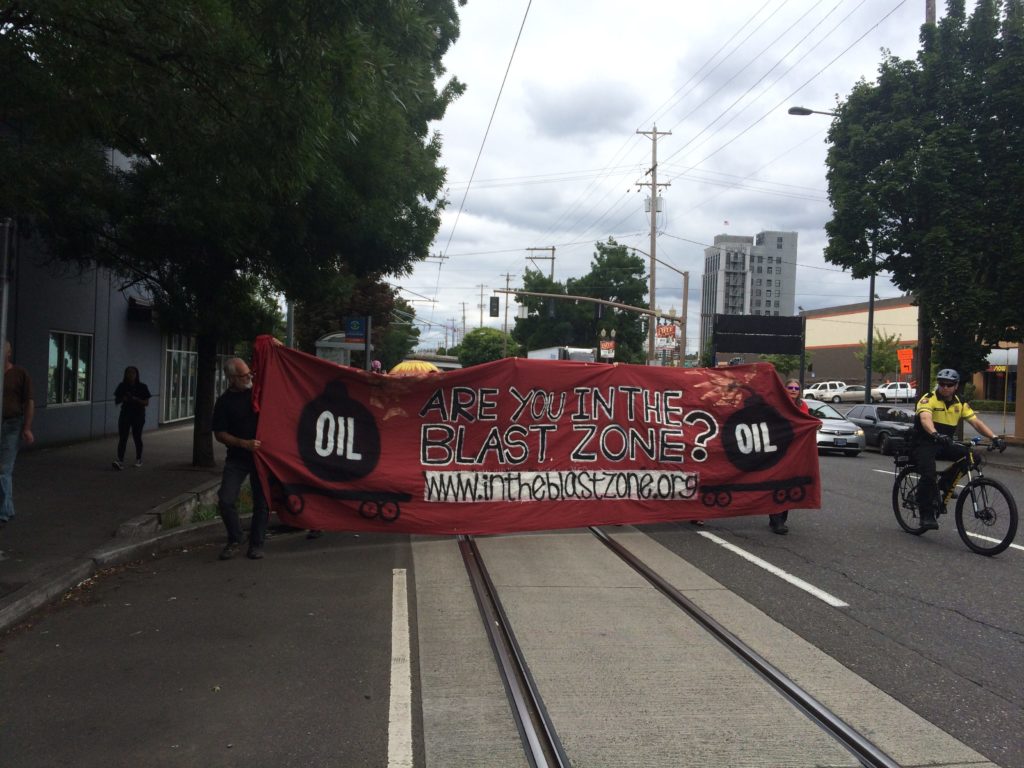 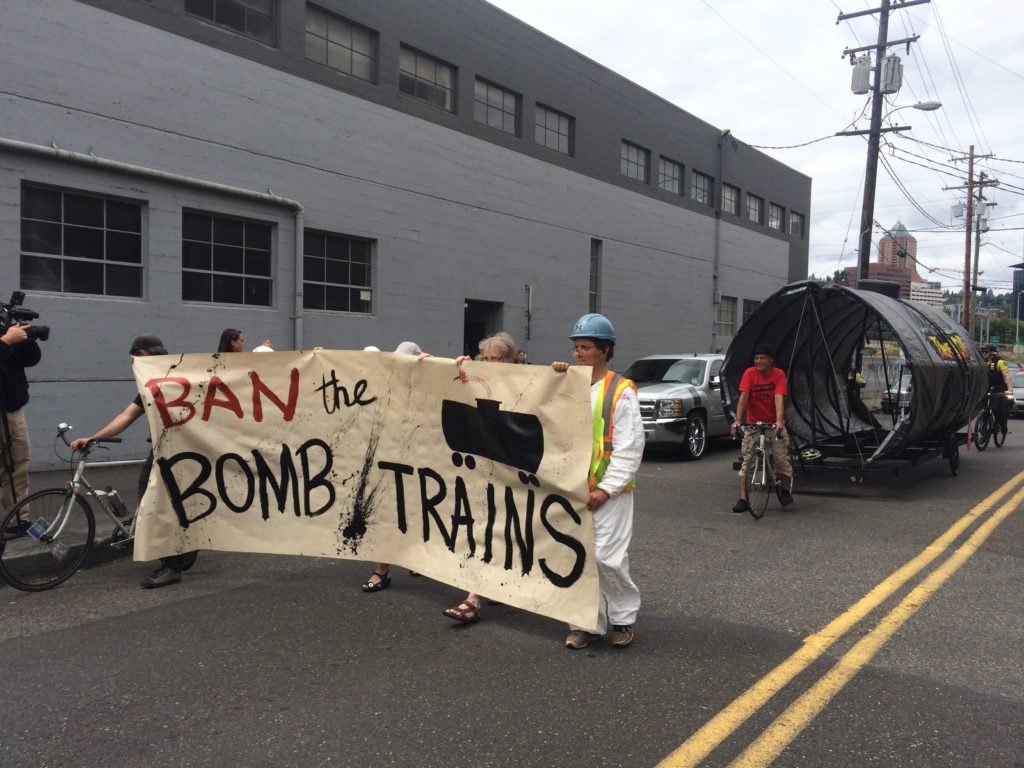 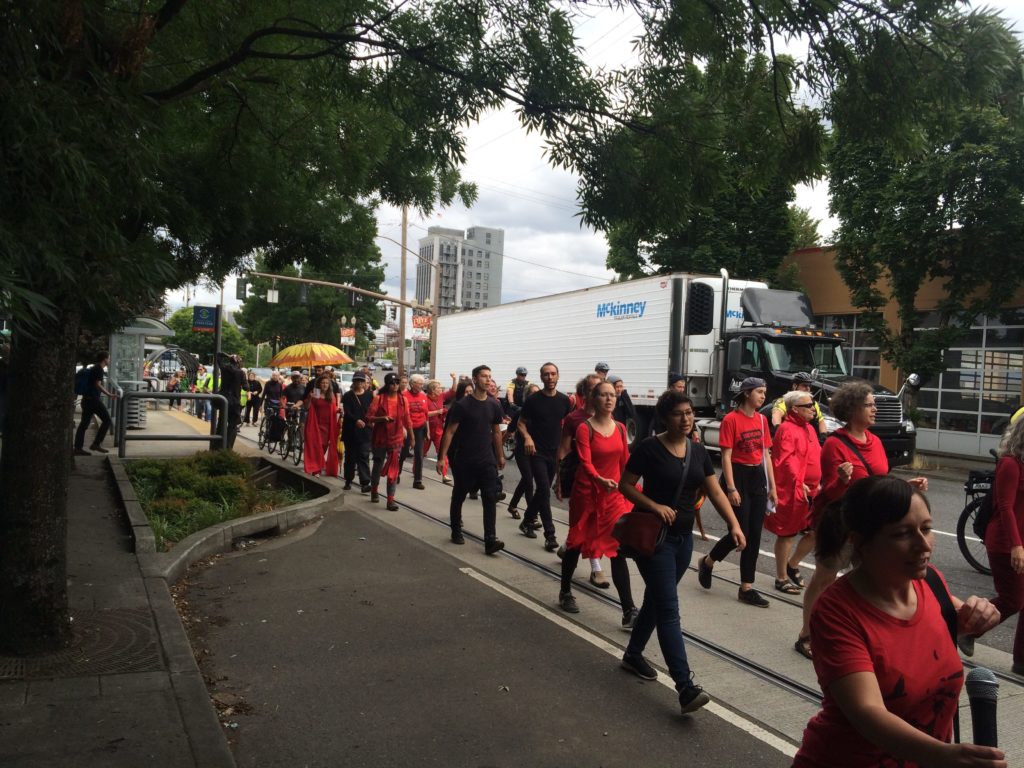 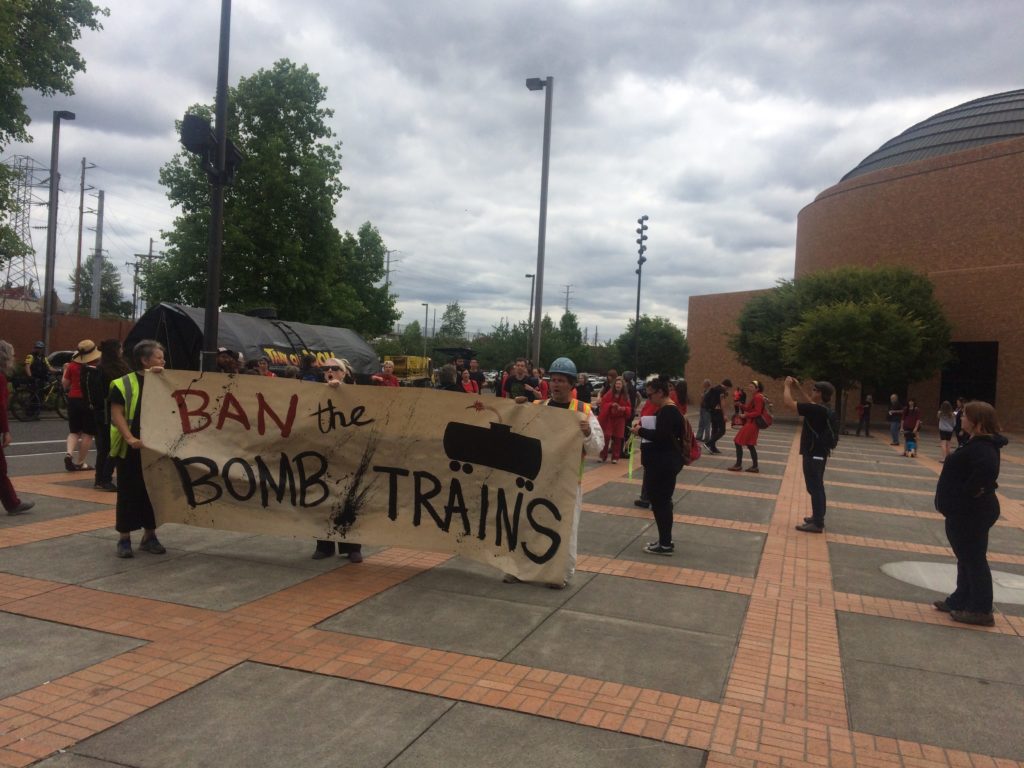 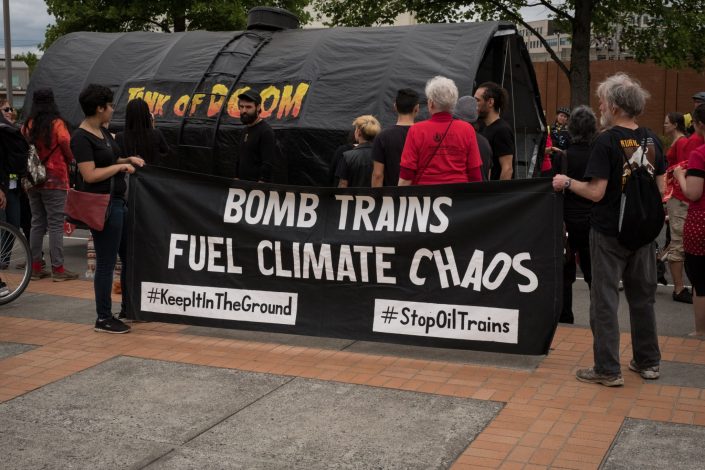 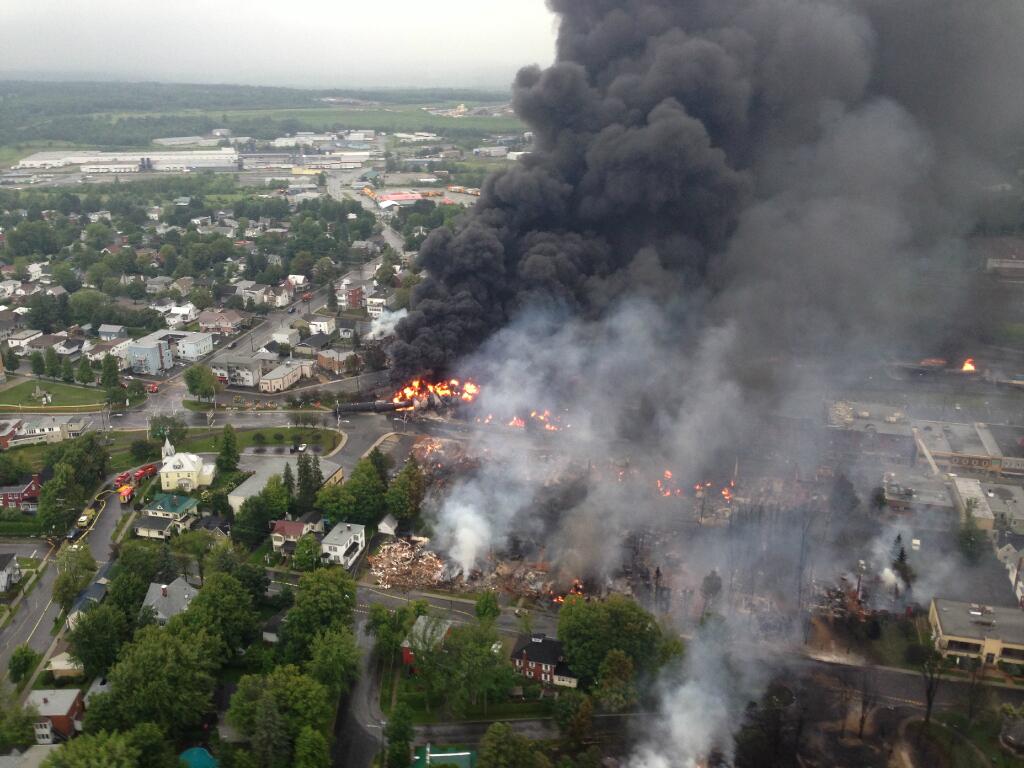 This will be the third anniversary of the oil train disaster in Lac-Mégantic, Quebec. People of Portland, Vancouver, and neighboring communities will come together to remember the 47 victims lost in the tragic explosions of Summer 2013.

To honor the lives of the 47 people, we present a program from our community. Much has been said about their fiery deaths. We will focus on their lives. Although we never met them, we know their names and Canadian newspapers have given us hints about their lives. Through our own hearts, we try to feel what life may have meant for them. We feel sorrow for the people of Lac-Mégantic and deep concern for communities everywhere that are threatened by oil-by-rail.

When: Wednesday, July 6 2016 – Continuous programing; drop in and join us between 11AM and 2PM 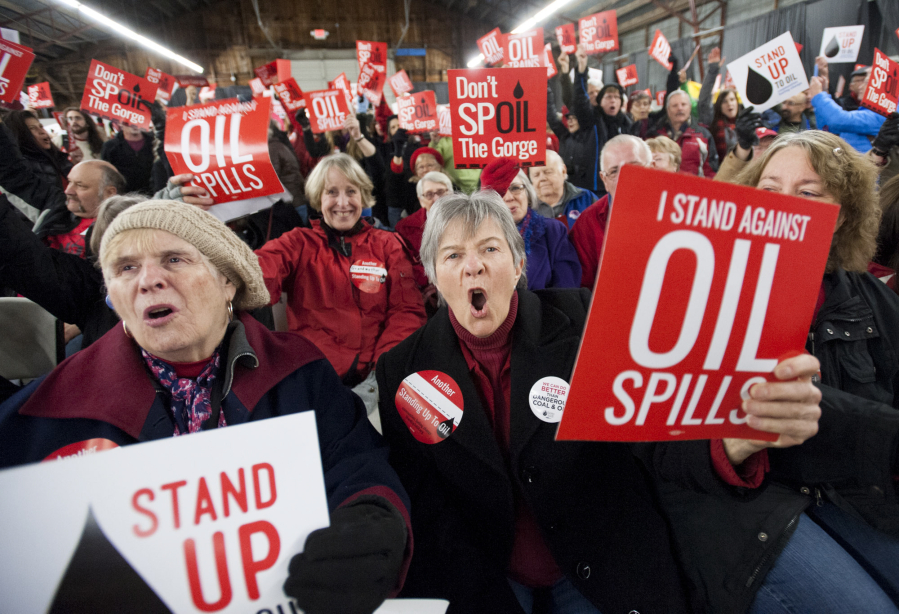 (This is not where the April 12th Hearing was held.)

“This will be the first day of a five-week process where legal teams from both sides present evidence and expert testimony is cross examined.

We’d like signs outside quoting resolutions of concern or opposition from various cities and a full house inside on the first and last days in Vancouver, and one day in Olympia.

We don’t want to make the EFSEC staff feel like they are walking through a gauntlet as they arrive.  They view us in a positive manner.

EFSEC’s trial-like hearing will begin and end in Vancouver, with different parties presenting detailed evidence about why the Council should approve or deny the project. Although the general public is not allowed to speak, our presence will help to convey the depth of opposition to the Tesoro Savage proposal in Vancouver.

On the first day of the hearing, let’s give EFSEC a warm welcome and rally outside the hearing.  The hearing room can hold roughly 100 members of the public – let’s make sure it’s packed!” 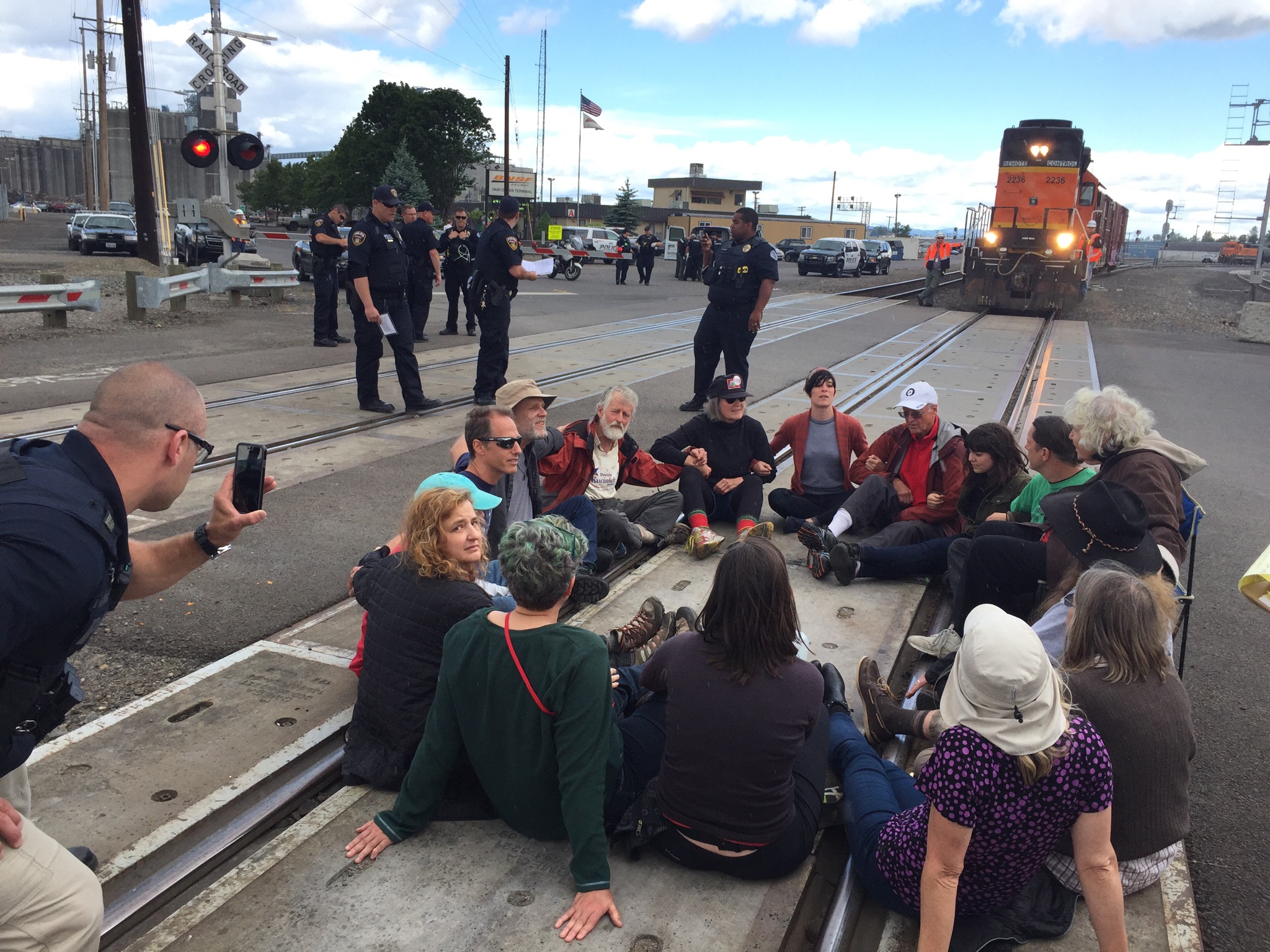 Over 100 people stopped rail traffic by forming a human blockade across the tracks in Vancouver, WA on Saturday, June 18.  Watch a recap video and donate to their legal fund.

Organized by the Fossil Fuel Resistance Network in response to the recent oil train derailment in Mosier, OR, the action united voices from across the region in concern not only about the potential local impacts of continued oil-by-rail, but also about the immediate and critical threats of carbon emissions and climate change. During the blockade, many community members spoke about their grief and rage that corporate greed is putting our local ecosystems and communities at risk and fueling the sixth great global extinction.

The Union Pacific train that derailed in Mosier on June 3rd contaminated the Columbia River and local sewer system with crude oil fracked from the Bakken Shale, ignited a fire that released toxic oil smoke into the air, evacuated local neighborhoods and schools, and ultimately drained the city’s entire aquifer.  In the last three years alone, oil train derailments in North America have killed forty-seven people, spilled millions of gallons of oil into waterways, forced the evacuation of thousands and caused billions of dollars in property damage and environmental destruction.

Community members connected the local disaster to a greater climate crisis – ecosystems across the planet are rapidly destabilizing, confirming the worst case scenarios of climate scientists’ predictions.  “We need Governors Brown and Inslee to do more than just advocate for a temporary moratorium on oil trains!  We need them to enact an immediate just transition to a post-fossil fuel economy,” said Portland resident Audrey Caines.  “If governments are not going to take decisive and immediate action to keep fossil fuels in the ground, people’s movements like this one will.”

BNSF and the Vancouver city police tried to disperse the crowd multiple times.  In an act of pure intimidation, BNSF ran an engine within 50 feet of the protesters on the tracks and blew it’s horn repeatedly.  Despite the looming non-verbal threat, nobody sitting on the rails made any moves to leave.

The Pacific Northwest has seen a growing movement against fossil fuel transport throughout the region.  Concerned residents point out that proposed new fossil fuel terminals and terminal expansions, including the proposed Tesoro-Savage oil terminal in Vancouver, WA, could result in a dramatic increase in coal and oil trains passing through the Columbia Gorge each week. Mosier would see five times the amount of oil train traffic if these projects are approved. “This is not just the beginning!” said Portland Rising Tide activist Mia Reback. “This movement is growing and will not stop until all fossil fuel extraction projects are shut down and all known fossil fuel reserves are kept safely in the ground! Oil barons beware: we will be back!” 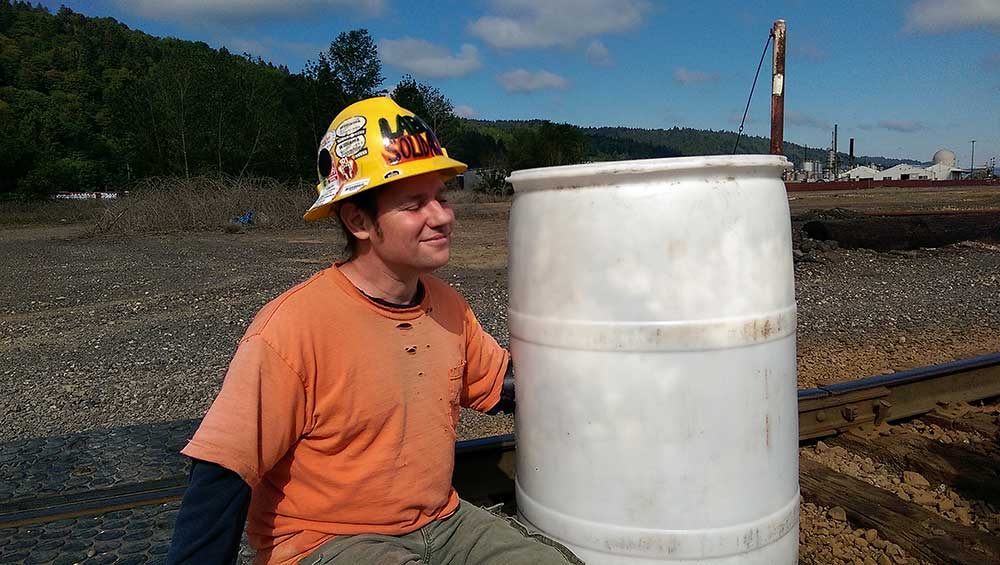 If you’re interested in being involved with the Fossil Fuel Resistance Action on June 18th, but don’t feel prepared to be a part of civil disobedience, this workshop is a great way to gain skills!

The workshop will be held in SE Portland. To RSVP and get more info call, email, or text
503-705-1943 goto350pdx@gmail.com. See this facebook page for more information. 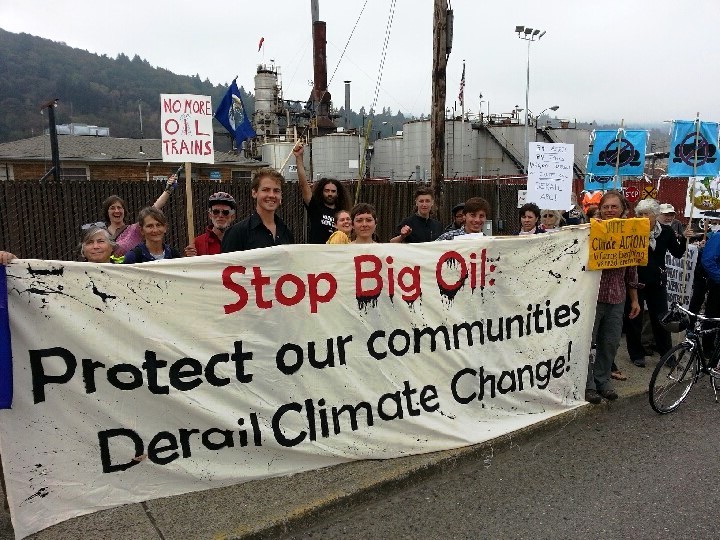 Why: On Friday, June 3rd, a Union Pacific train carrying crude oil fracked from the Bakken  crude derailed and caught fire in the Columbia River Gorge near Mosier, Oregon. The surrounding neighborhood, including an elementary school, was evacuated, oil spilled into the Columbia River, and the fire burned into the night.

On July 6th, 2013, an oil train derailed in Lac-Megantic, Quebec, 47 dead. More than 30 buildings were destroyed, and 36 demolished due to contamination.

The time to resist fossil fuel transport and demand a just transition to sustainable energy sources is now.

What: Join the growing Fossil Fuel Resistance Network in a direct action against the exploitative and dangerous transportation of fossil fuels by rail! Check FFRN’s Action page here.

Where: Meet up at Esther Short Park in Vancouver, near the gazebo