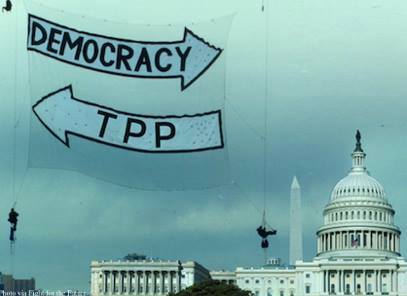 This December, leaders from around the world are decending on Paris to forge new climate agreements that will inevitably be written and supported by the fossil fuel industry. We need system change, not climate change!

The Trans-Pacific Partnership is the ultimate example of the a capitalist system that seeks to subvert democracy with corporate control of our communities. Land and people around the world will be impacted by the erosion of human rights and natural rights while increasing the rights of the 1% to profit at all costs.

Join us on the week of NAFTA’s anniversary to say NO to new free trade agreements that threaten people and climate. We will have a short rally followed by an action to go after a local champion of the TPP right here in our own backyard. Wear blue!

For more info on the TPP:
http://www.citizenstrade.org/ctc/oregon/orftc-campaigns/the-trans-pacific-free-trade-agreement/

Portland, OR. Tim Norgren of Stevenson, WA and Laborers International Union of North America member is locked to a barrel at Arc Logistics Partners’ Portland Terminal to draw a clear connection between fossil fuel exports and trade agreements like the TPP, and to call for action to put a stop to both. Tim is supported by the climate justice group Portland Rising Tide.

The crowd is gathered at Arc Logistics to support Tim and draw the connections between existing & proposed fossil fuel infrastructure and the Trans-Pacific Partnership, a secretive trade deal being pushed by many politicians including Democrats Senator Wyden, Representative Blumenauer, Representative Bonamici, and President Obama. Many environmental and labor groups oppose the Trans-Pacific Partnership (TPP) on the grounds that it is written and promoted by the fossil fuel industry and American Legislative Exchange Council, gives multinational corporations more rights than communities here in the US, sends jobs overseas, and jeopardizes worker and environmental protections around the Pacific Rim.

The AFL-CIO opposes the TPP and is holding a rally today at 4:30pm at the Sentinel Hotel to tell President Obama, who is in Portland to speak on trade agreements, to stand up for workers and the environment. “I’m locked down today in part because climate change is an issue of survival inextricably linked to so-called ‘free trade’ globalization efforts like the TPP. While many of us strongly appreciate President Obama’s willingness to bring the climate crisis into the national debate, he has been unwilling to connect major fossil fuel exports to the TPP or veto the Keystone XL pipeline,” said Tim Norgren.

With proposals by major Alberta Tar Sands investor Pembina Pipeline Corporation for a propane (derived from fracked gas in Alberta, Canada) export terminal in Portland, the Jordan Cove Natural Gas terminal proposed in Coos Bay, a proposed natural gas terminal in Warrenton, as well as already-operating Arc Logistics and Port Westward oil-by-rail terminals, Oregonians are concerned that the Trans Pacific Partnership will promote more export terminals, send domestic energy overseas to fuel jobs in countries with lower workers’ rights standards, and hasten climate change. At a time when scientists tell us we need to leave most fossil fuels in the ground to prevent disastrous climate change and runaway global warming, this is completely unacceptable.

Tim hopes this action will send a message to union leaders and politicians alike that everyday workers want sustainable jobs. “I’m also taking this action to let my union, the Laborers International Union of North America, know that it has rank and file members who are willing to stand up not only for prevailing wage contracts, but for the survival and rights of all workers, rather than support those who would see minimum wage remain at poverty levels while jobs are freely outsourced to foreign factories with subsistence wages and no safety or emissions standards whatsoever. All they offer us in return is a chance to build infrastructure for an economy based on environmentally destructive resource extraction, and that’s just not sustainable.”

People gathered today at Arc Logistics spoke about being inspired by resistance from other communities in the Pacific Northwest, and hope that local governments can be leaders in stopping fossil fuel exports. “In Seattle, the Mayor recently took a strong stance against Shell’s Arctic drilling fleet and hopes to stop drilling in the Arctic entirely. We can only hope Mayor Hales will do the same, reverse course, say no to the Pembina propane export terminal and begin the process of dismantling all current fossil fuel infrastructure in Portland,” said Rising Tide organizer Jonah Majure.

Portland Rising Tide will be hosting a legal defense fundraiser for Tim at 7:30 pm on May 22nd at Ecotrust (721 NW 9th Ave, Portland OR).