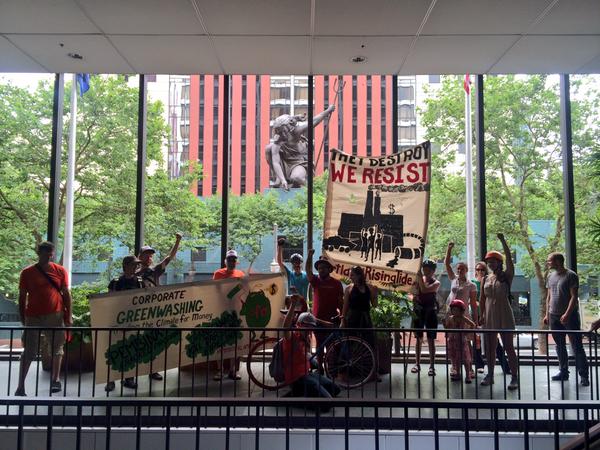 Yesterday, June 24th, the Climate Action Coalition took to the streets and City Hall to call for an end to the destruction of the climate and its open endorsement of the local fossil fuel economy. Although City Council decided to strengthen key parts of the Climate Action Plan, they failed to make many much-needed changes and actively removed a provision accounting for the methane footprint of fracked gas. 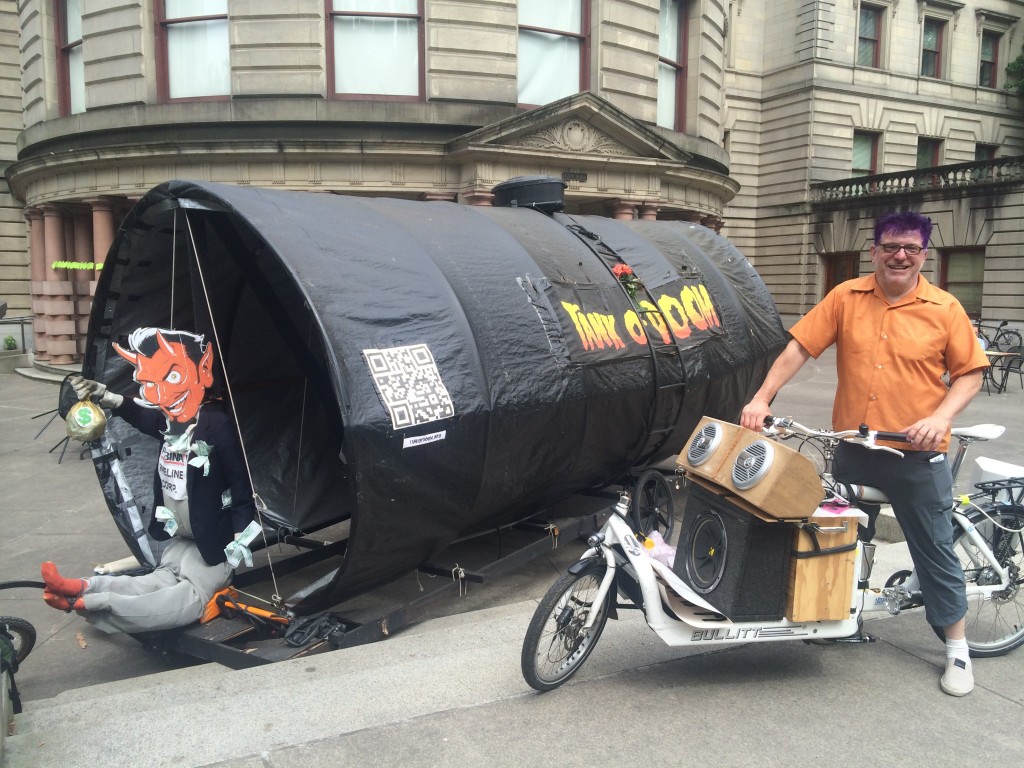 The day started with an 8am rally by BikeLoudPDX to call for an end to our violent road system and the adoption of a Vision Zero policy for transportation justice in Portland. Car culture and the violent road system that was created to support it was an intentional product of the fossil fuel industry’s multi-generational lobbying efforts. Riders from the rally and the Tank of DOOM then moved to the rally point for the Climate Action Ride at 11am. After some local media coverage and sweet tunes from the Disco Trike, the Tank of DOOM and its 50-person escort was off!

The first stop, much to the joy of many rival news cameras, was the mouth of the fossil fuel industry itself, The Oregonian. The Oregonian has been a long-time advocate for the Pembina Propane-by-Rail Terminal in St. Johns, despite countless concerns about the safety and climate-sense of shipping propane cars from fracking and tar sands sources to China to be used in plastics.

The time has long been over to treat The Oregonian like serious credible journalism, especially after a series of full-page ads by Pembina in their printed tabloids not-so-subtly reveal who funds a significant portion of their ever-shrinking budget (and credibility).

The Tank of DOOM rode next to CFM Communications, conveniently located across the street from the Portland Building and City Hall. CFM represents Pembina, TransCanada, and Nestle as well as many public and well-known institutions.

“Local businesses that don’t participate directly in extraction, transfer, or sale of fossil fuels can still be climate profiteers. CFM Communications makes money trying to convince Portland that the Pembina propane export terminal would not be environmentally damaging or contribute to climate chaos. Effectively, they obscure the reality of Pembina’s reputation as a major polluter with their well-funded propaganda campaign. It’s objectionable to have local businesses profiting off the destruction of the planet. Their other clients and the public should be aware of their business practices.” – Nick Caleb, representing Our Children’s Trust on the Climate Action Coalition

Despite security locking the elevators to their office and numerous threats police eviction, we were able to occupy their lobby and show the city bureaus across the street who CFM was representing. The Tank of DOOM, to the cheers of a tour group, then moved onto the next target: Portland State University.

The Climate Riders occupied the lobby of PSU Administration, demanding accountability for the close ties Portland State’s board of trustees and the PSU Foundation have to fossil fuel extraction. Students and Alumni also talked about divestment and the fact that Peter Stott, a board member of megaload-haulin’ Omega-Morgan, has a building named after him.

The Tank of DOOM then rolled down the street to support another rally by the Climate Action Coalition, this time with faith-based groups giving speeches and preparing to testify at the City Council hearing on the Climate Action Plan. The rally began with reading the names of the victims in the AME Shooting in Charleston who were murdered because they were black. The climate movement is as much a movement about the systemic dismantling white supremacy and colonization as it is about climate change. 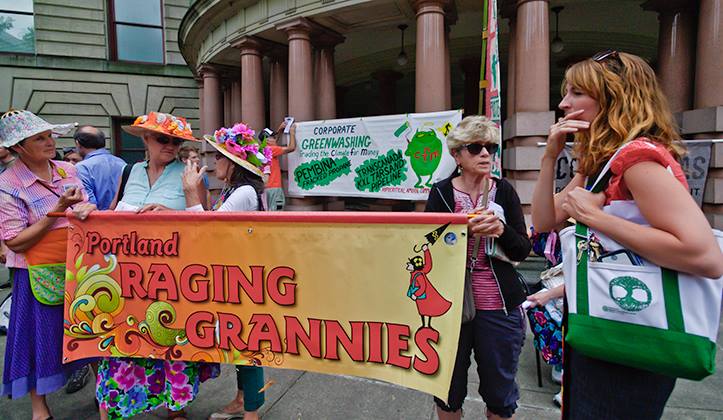 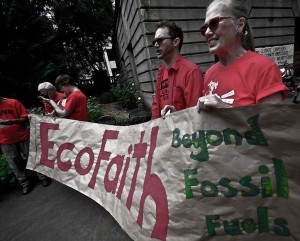 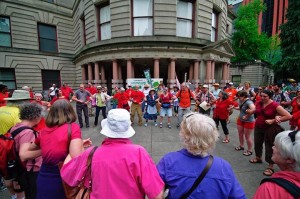 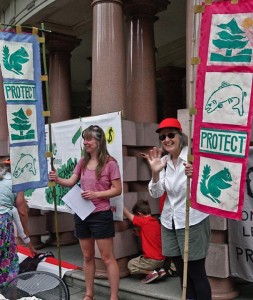 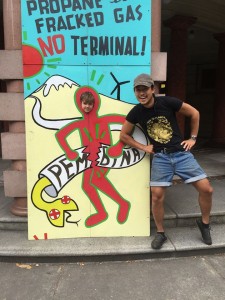 As the rally participants prepared to move into City Hall to testify for a stronger Climate Action Plan, the ride continued onward to target another local public official who promotes climate catastrophe.

Despite threats from security, the Tank of DOOM escort parked in the courtyard of the building that held the offices of the Department of Environmental Quality, Bonneville Power Administration, Senator Wyden, and the bike-friendly Representative Blumenauer. Tori Cole of CAC and PDX Bike Swarm spoke about the DEQ’s frequent propensity to support fossil fuel expansions, despite histories of unpermitted operations and continual violations of state permitting laws. CAC members also spoke about the BPA and its masquerade as “green” energy. Dams like those the BPA operate are massive barriers to the river ecology, including salmon runs, that indigenous communities and forests in our bioregion depend on.

As folks spoke about the DEQ and BPA, members of Oregon Fair Trade Campaign dropped a banner from the top of a parking garage across the street, calling out Blumenauer for his support of the TPP FastTrack and its implications for fossil fuel exports and climate action. Fossil fuel companies could sue communities for passing laws that ban fossil fuel infrastructure, giving corporations more rights than communities or even the federal government.

The next stop on the tour was the Shell Station at 12th and Hawthorne. Shell’s plans to drill in the Arctic this summer are based on the expectations of a catastrophic 2C rise in global temperatures. Shell’s arctic drilling rig, the Polar Pioneer, experienced massive resistance reminiscent of the WTO protests. The gas station was briefly shut down and no cars could fill up with gasoline that likely came from Shell’s violent and spill-ridden extraction in Nigeria.

The Climate Action Ride finally moved towards its last polluter, a heinous company that profits not only off climate change but also the wars fought over it: Precision Castparts. Precision Castparts makes equipment for fossil fuel extraction as well as airfoils for the non-functional F-35 jet that has cost the US taxpayers over $1 trillion. They are also Portland’s largest company and the #1 industrial air polluter in the entire US.

There is something particularly sickening when confronted with the fossil fuel economy we live in, creating almost every modern war, destroying our access to safe food, and keeping us from transportation justice. Even when politicians argue for stronger climate action, they often use it as an excuse to push for more displacement through housing injustice and gentrification.

Upon our return to City Hall and the Climate Action Plan hearing, the public was still not allowed to testify as industry groups and other groups friendly to the City’s climate inaction and greenwashing agenda continued to praise the City. Public testimony was extremely limited and almost all who signed up to testify for a stronger CAP were turned away. City Council didn’t even strengthen the existing CAP; they instead unanimously accepted a proposal from Michael Armstrong to remove a specific provision that acknowledges the city to account for fugitive methane emissions from fracking wells in reducing citywide emissions. He then proposed instead that the city praise NW Natural for retrofitting its local infrastructure to make it more sustainable, despite NW Natural’s dependence on fracking for its natural gas. City Council ended the day using the full weight of our City of Portland to greenwash NW Natural, a private fossil fuel corporation.

Members of the Climate Action Coalition are extremely disappointed with this greenwashing, and expect significant and constant public involvement in moving the implementation of the CAP forward, especially regarding equity concerns for local residents and future generations.

Stay tuned for when Portland Rising Tide exposes the depths of the fossil fuel industry in Mapping the PDX Fossil Fuel Corridor.