According to a May 2014 report by Oil Change International, from 2007 to 2013 the volume of oil shipped by rail in the United States increased 70 times. The current volume of oil shipped by rail in Canada and the US is at 1 million barrels per day (bpd). Forecasts predict volumes as high as 5.1 million bpd nationwide by 2016. According to Sightline Institute, if all oil-related projects proposed in our region are approved, 858,800 bpd, a little more than the capacity of  the Keystone XL pipeline, could soon be passing through the Pacific Northwest.

Meanwhile, scientific evidence leaves little doubt that climate change is already beginning to wreak havoc in the form of extreme weather events, receding Arctic sea ice, and melting ice sheets. This September was the warmest recorded yet. With the CO2 that human activity has so far sent into the atmosphere, scientists believe that the melting of the Antarctic and Greenland ice sheets will result in a 20 meter (66 feet) rise in sea level over the next several centuries. Almost anyone over 50-years-old you talk with these days will acknowledge the weather is weird compared to what they knew growing up. You don’t need a weatherman to know which way the wind blows and you don’t need a climate scientist to know that the wind is acting strangely. The last thing we should be endeavoring to do is burn fossil fuels at an ever increasing rate but as the statistics above and others reflect, that is exactly what we are doing.

Even with all of the alarming news about the climate, politicians–like Governor Kitzhaber, for example—want to see oil-by-rail as only a public safety problem with some kind of a solution. Public safety is, of course, something we should be worried about. Trains pulling 100 cars of explosive Bakken Shale crude are going right through the centers of towns, right past homes and schools. They have already killed dozens of  people. Fire departments and other agencies say they are ill-equipped to handle potential fires. The trains run parallel to the Columbia River for about 250 miles. Are regional agencies prepared for a major spill on the Columbia River? But even if we could make the trains completely safe from derailments and explosions (which is probably impossible–they don’t call them bomb trains for nothing), can we ever consider them safe if each one contains approximately 327 metric tons of climate destroying CO2?

Admittedly, 327 metric tons, though it sounds big, is a tiny fraction of the world’s total annual CO2 output of 32 billion metric tons per year. One could dismiss each individual tank car of oil as a miniscule drop of doom in the big bucket of total green house potential. Symbolically however, the reality that our society has chosen to exploit a resource that is damaging to ecosystems, human health, social fabric, and the global climate, in spite of all the evidence that screams urgently at us to stop burning fossil fuels of any kind, each tank car represents certain doom for human industrial civilization. Each one symbolizes our collective inability to acknowledge the truth of our predicament. In every tank car are the malls, the oversized big-box retail stores, the oversized trucks and cars, the oversized houses built at the end of cul-de-sacs and hours-long commutes, the endless volumes of plastic trash washing into the oceans, and all of the things that we should be trying to rethink as quickly as possible. Each tank car represents all the things that we are clever enough to invent but too stupid to manage responsibly. Each car represents all of those aspects of our nature that we seem incapable of changing. If that ain’t doom, what is? It’s not so much the absolute amount of CO2 that is in each tank car. It is the cosmically tragic fact that we let them keep rolling.

Why do we let them? As it turns out, each tank of doom contains more evil than meets the eye. The cars keep rolling because, with the political and economic systems as they are, the average person has practically no power. Even when it is becoming apparent that a majority of U.S. citizens support policies to curb climate change, there is no progress on policy. In a political system in which money is considered free speech,  the preferences of those with the most money win out.  Through corruption, collusion, and the media control and advertising that leads us willingly to the slaughter, a few corporations and wealthy individuals lock North Americans into an isolating and politically debilitating dependency on the automobile that is mowing down every ecosystem on the planet. Each oil tank car represents the entrenchment of that dependency and all of the corruption that keeps the junky crawling back for more.

Yes. The tanks of doom just keep coming, with more and more of them coming every day. There is such a profound sense of unfairness about all of this. Effectively what is happening is that very few individuals with lots of money are deciding the fate of all life on the planet. They may not be conspiring together necessarily,  but as the National City Lines case illustrates, collusion happens. Even without a conspiracy, their collective efforts to act only in their own self-interests achieve the same result. What is an ordinary person to do? There are lots of ways that an individual can disengage from some aspects of the current system. There are a lot of groups that one can join in order to add their efforts to the construction of better alternatives.

At some point though, we have to get political. If we want to manifest the kind of radical changes that are necessary to break free of the stranglehold that the fossil fuel companies, and corporations generally, have on our society, joining with others in mass actions of civil disobedience to disrupt business as usual may be the only tool we have left. History shows that the only time radical system change happens is when some critical mass of the citizenry finally stands up and so acts. The New Deal reforms of the 1930s, the civil rights and environmental legislation of the sixties and seventies where all passed on the tails of mass citizen unrest. These were real reforms that made a positive difference in our well-being. Compare those periods with the era of political sleep walking we’ve been muddling through since the mid-seventies. While we’ve been sawing logs, many of the reforms of the New Deal and those of the 60’s and 70’s have been effectively erased. If there is any hope in all of this doom, it is in people finally standing up once again and resisting in ways that cost the elites real money. Just think what could happen if enough people got together and decided not to go to work for a few days. If only… 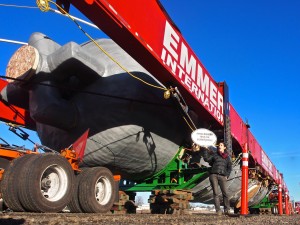 To raise awareness that every oil tank car on the North American railways is a tank of doom, and to inspire more people to stand up with us, a number of us at Portland Rising Tide have built (in keeping with the times) an oversized bike float called, naturally, the Tank of Doom. The Tank of Doom was originally called “Megaload by Bike”. We were inspired by a vision of a regulatory dream world in which the Oregon Department of Transportation would not permit Megaloads—large pieces of Alberta tar sands mining and processing equipment that approach the size of Saturn V rockets—to cross the state unless they were towed by Warren Buffett on a bicycle. It seemed like it could make great street theater to parody such a fantastic event.

Alas, the megaloads were quickly forgotten once they left the state. Fortunately, our design lent itself to a quick conversion to something that looks very much like an oil tank car.  Those are likely to be highly visible in the media and not forgotten soon since over the next few years various problems (like explosions) may be frequent occurrences as a few million barrels of crude are moved over the North American railways each day.

Look for the Tank of Doom at a climate justice direct action happening soon near you. What do you do when you see an endless train of Tanks of Doom coming down the tracks? Stand up! Fight back!

* The 327 metric tons/tank car is a calculation based on a hard-to-pin-down figure: kilograms of CO2 per barrel of oil. The number you get there depends on whether you assume that every hydrocarbon molecule in the barrel will be turned into a combustible product or whether you consider the reality that some of those hydrocarbons get turned into asphalt, plastic polymers, etc. If you assume the former, you get around 432 kg CO2 / barrel and 317 kg CO2 / barrel if don’t assume the entire barrel is burned.

It seems reasonable to use the higher number because, yes I am biased, and because the calculation does not account for embedded CO2. For example, they are mining sand from various places and transporting that to the Bakken Shale drill sites. What about all those flare-offs of methane at each wellhead? How much energy is required to truck the huge amounts of water that fracking requires out to the drill sites? It would take weeks or months of research to track all this down. If you could with some accuracy include the embedded energy in a unit of Bakken Shale crude, you would probably get a number way higher than 317 kg CO2 / barrel.

This is an approximate calculation.