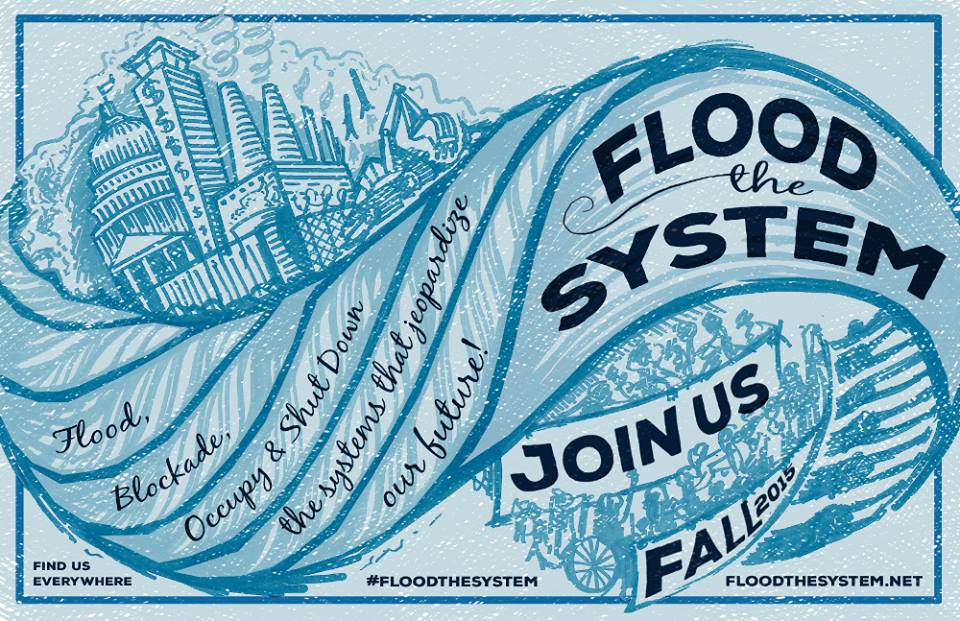 Starting this September, Rising Tide North America is calling for mass actions to shut down the economic and political systems threatening our survival.

Already, hundreds of thousands are streaming into the streets to fight back against climate chaos, capitalism and white supremacy.

This wave of resistance couldn’t be more urgent. To stop climate chaos we need a phenomenal escalation in organizing, participation and tactical courage. We need a profound social transformation to uproot the institutions of capitalism, colonialism, patriarchy, and white supremacy, the systems that created the climate crisis. And we need to link arms with allies fighting for migrant justice, dignified work and pay, and an end to the criminalization and brutal policing of black and brown bodies.

In the lead up to the United Nations climate talks in Paris, in December, we will escalate local and regional resistance against systems that threaten our collective survival. Together, we will open alternative paths to the failing negotiations of political elites.

This is not another protest. It is a call for a massive economic and political intervention. It is a call to build the relationships needed to sustain our struggles for the long haul. To build popular power along the intersections of race, class, gender and ability. To collectively unleash our power and change everything.

Here in the Pacific Northwest, we are mobilizing locally.  If you want to get involved, let us know.  And if you already know you are willing to take direct action to address the climate crisis and stop the fossil fuel projects in our region, sign the Rising Tide Regional Pledge of Resistance.

See you at the barricades.