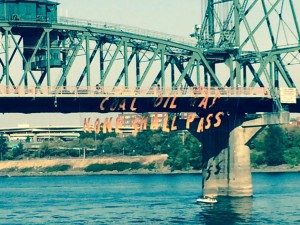 Say No to Pdx

A limited number of trained individuals may engage in planned non-violent civil disobedience at the event. Rally participants will not be risking arrest.

Because Oil Trains Are Never Safe!

With essentially no public involvement or regulatory proceedings, the ArcLogistics terminal began operations in January of 2014.  This was possible because the site did not require construction, and thus a permitting process, like other controversial fossil fuel infrastructure projects in the region. It operates under modified permits issued to the facility’s previous owners, who were in the business of producing asphalt.

Union Pacific trains carry oil along Interstate 84 in eastern Oregon and into the gorge before reaching the ArcLogistics terminal, which has the capacity to store around 1.5 million barrels of oil. The volume they are currently transporting is unknown; it is telling, however, that in recent months, for the very first time, UP trains carrying nothing but oil have been seen in the Columbia River Gorge. The facility is currently undergoing construction that will increase its operational capacity, anticipated to reach 16,250 bpd.  MORE HERE