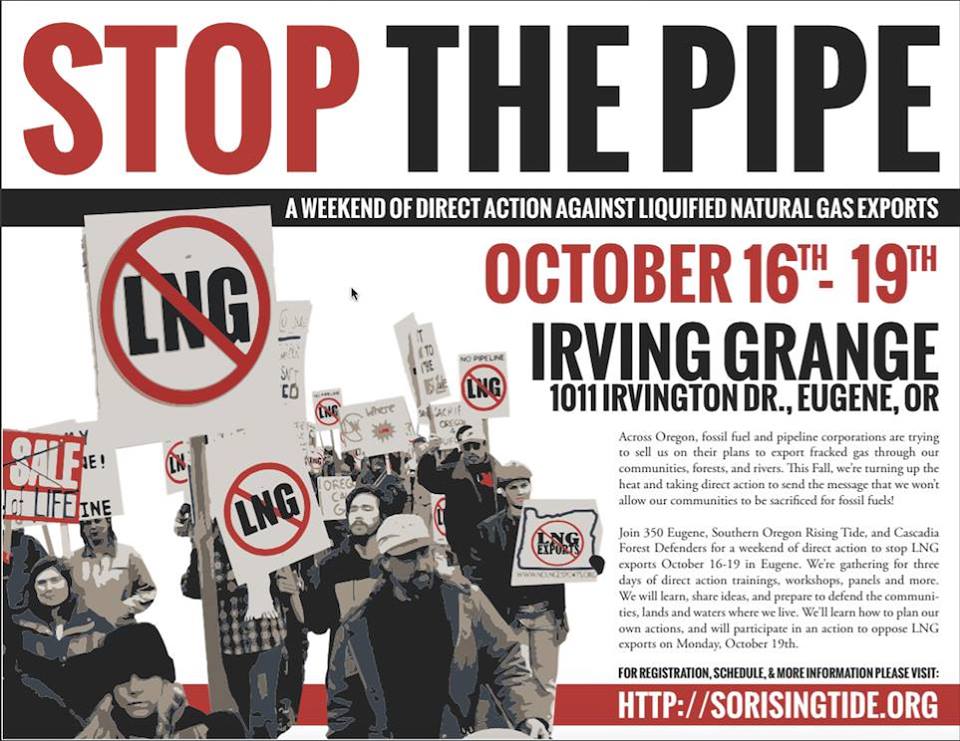 Federal data shows that if the Jordan Cove facility were to go online, it would be the largest single source of carbon pollution in the state of Oregon in 2020 when the Boardman coal facility shuts down.

When the project was an import pipeline and a similar statement was issued by FERC in 2010, then Governor Ted Kulongoski publicly vowed to go to court to stop the federal government from moving forward with the proposal and that proposal did not proceed.  This time around, Governor Kate Brown has yet to take a public stance on this project. Oregon elected officials, especially Democrats like Gov. Kate Brown, look to the politically active metropolitan Willamette Valley communities for cues on environmental policies and priorities.

While FERC continues it’s blatant rubberstamping of destructive pipelines projects across the country and Oregon’s elected officials refuse to take a stand, resistance to this project is growing in southern Oregon.  In the last week alone, southern Oregon has seen corporate office shutdowns in Medford and rallies of several hundred people in the Coos Bay area– the wrap up of a protest hike along 315 miles of pipeline route.  And yet, at the time I’m writing this, to my knowledge no Portland news source has covered any of the major actions happening in southern Oregon.

Southern Oregon might seem far away from metropolitan Portland geographically, economically, politically and culturally, as a person who has lived in both places, I can say it often is.  But in our current state system, rural Southern Oregon is economically and politically influenced by the much larger population in urban Portland.  In an era of climate change, we cannot ignore devastating projects of this nature happening anywhere but especially those that we, as residents of urban Portland, have immense power to help stop.

Portland’s vibrant and active activist community can make or break this fight if we  join Southern Oregonians in holding the thin green line against fossil fuel destruction and export in our region.

Here are several easy things you can do this week:

*Write a letter to the editor*
We want to put a lot of media pressure on the Governor and make sure the public knows about how the state can take action to stop LNG and how a previous governor challenged FERC on LNG. This is especially important for folks in the Portland area targeting Portland newsources. More information on writing a letter to the editor here.

The statewide coalition against LNG is crowdsourcing a full page ad to get the word out about Gov. Kate Brown’s ability to stop this project.  Please donate if you can and share across social media channels.

*Call the Governor on Monday Oct. 5th at 503-378-4582 and Spread the Word*
We need to keep the pressure on the Governor and make it clear the action we expect her to take in the face of FERC’s grossly inadequate review.  It only takes a few minutes to join in to weigh in on the importance of a LNG export-free Oregon.  More information and talking points here and join and share on Facebook here.

*Light up Social Media with No LNG!*
Even if you’re not much for social media in your personal life, let’s make it a part of your organizing life! We need to saturate Gov Brown’s twitter and facebook feeds with pictures of us rallying and being awesome! You can get messaging suggestions and pics to send the Governor here.

Check back here and with Southern Oregon Rising Tide for the latest updates and plans for resistance!