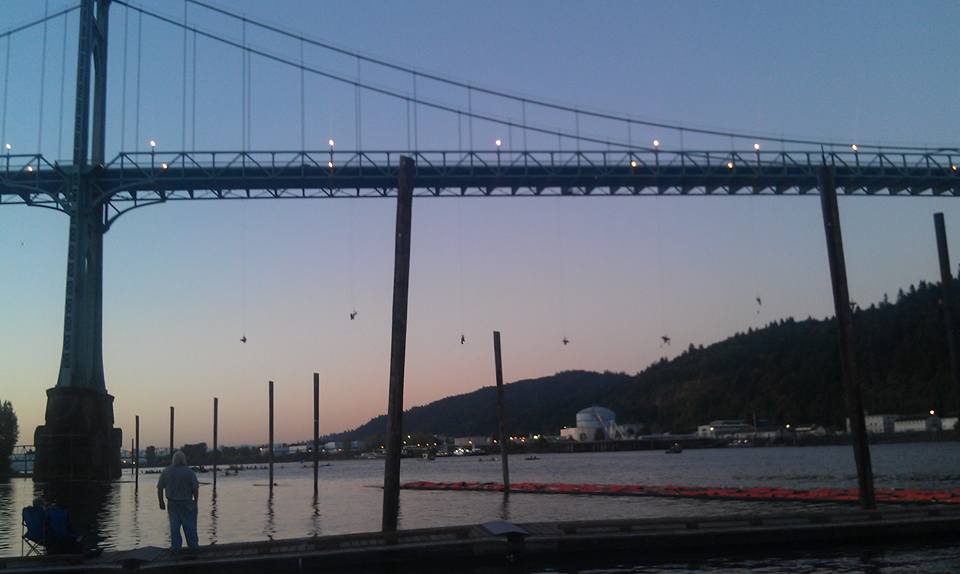 (Portland, OR) The Fennica, Shell Oil’s damaged ice-breaker, began to move at 5:45 a.m. from the dock where it was being repaired for a damaged hull and was met with a blockade from Greenpeace activists hanging from the St. John’s Bridge –which was closed to traffic–and Climate Action Coalition kayaktivists on the water.

As reporters began to speculate on whether the protesters had a plan B, Daphne Wysham said “There is no Plan B, just as there is no Planet B; we have no intention of moving until President Obama rescinds the permit for Shell to drill in the Arctic.”

“On the hottest day in Portland, OR years, in two years, activists are prepared to stay as long as required,” said Nick Caleb, an attorney with Our Children’s Trust. “We are doing this for the children and for future generations to come. Shell cannot take their future away.”

The 24-hour vigil at Cathedral Park in Portland, OR, began on July 27 on the banks of the Willamette River in anticipation of the MSV Fennica’s departure. Once the Fennica departs, Shell plans to commence drilling in the Arctic. The Department of Interior has stated that there is a 75 percent chance of an oil spill in the Arctic once drilling commences, a spill which experts say would be virtually impossible to clean up, posing unacceptable risks to indigenous peoples and the marine environment. Shell is proposing to commence drilling in this untouched region—thanks to rapidly melting ice in the Arctic due to climate change– at a time when NASA’s former top climate scientist says we may see at least 10 feet of sea level rise by 2050.

“Scientists tell us we can’t drill in the Arctic if we want to avoid dangerous climate change and sea level rise that threatens three-quarters of the Earth’s major cities in the next few decades. Nevertheless, Shell is putting its corporate profits ahead of the future of the planet and preparing to drill in a region where an oil spill cannot be cleaned up. Portland kayaktivists are the last phalanx of resistance to this insanity,” said Daphne Wysham, director of the Climate and Energy Program at the Center for Sustainable Economy in Portland, OR.

“In Portland and across the Northwest, we have the unique opportunity and responsibility to act as a chokepoint in the transport of dirty coal, oil, and gas. For years, Portland has demonstrated powerful resistance to the shipping of coal and oil by rail, as well as tar sands mining equipment by road. We view the arrival of Shell’s icebreaker in Portland as another chance to disrupt new oil development and demonstrate that any and all new fossil fuel exploration and extraction is an unacceptable risk to our climate and future,” said Meredith Cox of Portland Rising Tide.

“Scientists are sounding the alarm, telling us we need to keep most of our known fossil fuel reserves in the ground. This makes  Shell’s extreme extraction adventure in the Arctic the definition of insanity. We’re talking about putting humanity, our entire planet’s livability at extreme risk. Portland is going to be taking a stand to say, ‘Shell No!’ We’re here fighting for humanity against the most wealthy and powerful industry in human history, but we’re not afraid, because everything we love and value in life is on the line,” said Maya Jarrad with 350PDX.

Professional photos and a livestream video of the various actions will be available to the press upon request. Check https://cel.ly/c/sHellNOPDX/landing, www.350pdx.org, www.portlandrisingtide.org , www.sustainable-economy.org for updates. Follow our Twitter feeds at #PDXvsShell, #Floodthesystem and #ShellNo. Text @sHellNoPDX to 23559 to receive text updates on Tuesday’s vigil and other planned actions.