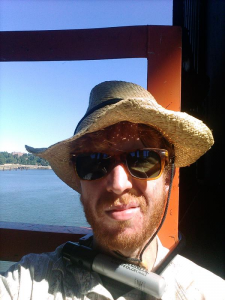 Climate justice activist Jonah Majure, a settler resident of Portland in occupied Multnomah land locked himself by the neck to a Burlington Northern rail bridge in NE Portland to further prevent the Fennica from leaving Portland. The bridge represents a choke point in the Fennica’s route because it must raise in order for the ship to depart Portland. Any attempt to raise the bridge with Jonah still attached would threaten his life. Jonah vowed to stay locked to the bridge until he is forcibly removed or until workers on MSV Fennica, Portland Mayor Charlie Hales, Oregon Governor Kate Brown or President Obama assert their power to put an end to Shell’s plans to drill in the Arctic.

In preparation for his lockdown, Jonah accepted the personal risk, acknowledging, “This action was made necessary by the recklessness of so-called authorities complicit in the destruction of colonized indigenous land. I’m acting in solidarity with Indigenous communities around the world who are on the front lines of resource extraction on stolen lands. It’s time for the climate movement to move beyond individual issues and start looking at the greater systems of oppression like colonialism, racism and sexism that are destroying people and the planet.” He urges every individual and organization with the power to disrupt the extraction and transport of hydrocarbon fuels to act in solidarity with those defending their ancestral lands and livelihoods: “Our only hope of preventing catastrophic climate change and the genocide of Northern native peoples is to immediately halt all fossil fuel development.”

Global scientists have warned that at least 80% of known fossil fuel reserves must remain unburned to avoid catastrophic global warming. Shell’s business venture to expand its oil reserves flies in the face of local and global attempts to curb greenhouse gas emissions. Organizers are hoping the blockade and other actions against the Fennica will delay Arctic drilling and put pressure on local and national leaders to cease fossil fuel developments.

Biologist Carl Wassilie of the Yupiaq Nation in colonized Alaska, agreed: “Shell is violating the peace and security of humankind in the Arctic, continuing on the destructive path of putting indigenous peoples at extreme risk in an already rapidly changing climate. The policies of exploitation of the Arctic Ocean by the United States allowing international criminals, like Shell, not only go against hundreds of Alaska Tribal Governments resolutions opposed to offshore oil and gas activities; but go against Pope Francis’ Encyclical to end exploitative economic systems. The Pope calls on global society to ensure Reverence and Respect for Mother Earth. The human rights violations by the U.S. allowing Shell to drill into the Chukchi Sea infringes on the legal and moral obligation of society to protect and defend Indigenous Peoples of the Arctic.”

Battles with Shell over Arctic drilling in Portland and Seattle are seen by activists as an opening round of #FloodTheSystem—a continent-wide upsurge of grassroots disruption of the fossil fuel economy and all systems of oppression planned through December. As Jonah emphasized, “We cannot meaningfully address the climate crisis while leaving in place the systems of colonialism, white supremacy, patriarchy, and out of control capitalism.”