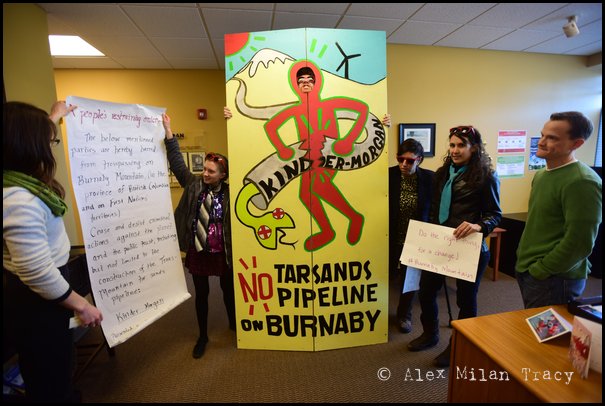 Vancouver, WA — A group of activists with Portland Rising Tide interrupted business as usual on Monday afternoon at the Vancouver office of Kinder Morgan to deliver a ‘People’s Restraining Order’ against the company’s plans to expand the Trans Mountain tar sands pipeline in British Columbia. 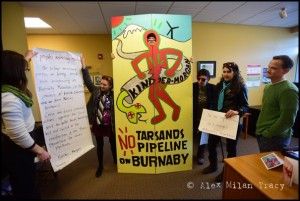 A representative from Kinder Morgan’s office tried to prevent protesters from entering the office by blocking the door. He refused to receive the ‘People’s Restraining Order,’ calling the peaceful gathering a major disruption.

The proposed Trans Mountain pipeline expansion would transport oil from the Alberta tar sands, and would travel through un-ceded Musqueam, Squamish, and Selilwitulh territories in British Columbia. The Trans Mountain expansion has faced serious opposition from local residents and first nations people in Burnaby Mountain, with over 100 people arrested since early September.  On December 1st, the Burnaby community celebrated when the court ruled that Kinder Morgan could not continue to block protesters from entering the proposed expansion site where the company had been surveying and performing geotechnical drills. Kinder Morgan has plans to continue construction of the pipeline and intends to go to the Canadian National Energy Board in early 2015 to present its case for the approval of the Trans Mountain expansion pipeline.

Rising Tide is an international group with chapters in Portland and Vancouver that works to address the root causes of climate change. Portland Rising Tide opposes the Trans Mountain pipeline expansion due to its ultimate role in extracting Alberta tar sands, facilitating what many have called the most destructive industrial project on Earth.

According to Portland Rising Tide organizer, Meredith Cocks, “We are here to show Kinder Morgan that we stand in solidarity with the Burnaby residents and first nations people resisting this project. In light of the climate negotiations in Peru, continuing to allow expansion of tar sands extraction, and fossil fuel infrastructure in general, is fundamentally a disastrous route to take.”