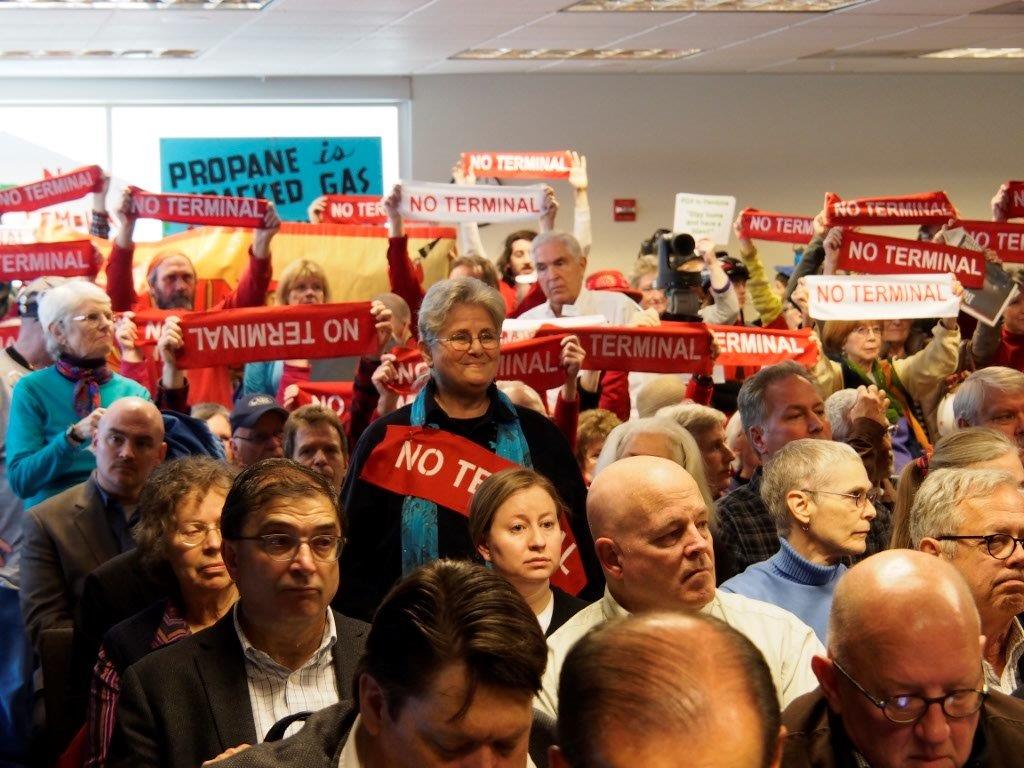 On Tuesday evening (April 7) the Portland Planning and Sustainability Commission voted 6-4 to allow the zoning and code changes necessary to permit the construction of the proposed Pembina propane terminal in North Portland at Port of Portland Terminal 6.

The hearing room was packed all afternoon and into the evening with most people indicating opposition to the terminal. Approximately 90% of the testimony given was against the project. Most statements cited climate change or safety (the worst case blast zone for the terminal extends nearly 3 miles from the terminal site) as reasons to deny the zone changes required for the project to proceed. Also mentioned was the fact that the propane exported via the proposed terminal would come by way of fracking or the Alberta tar sands.

One of the commissioners who voted against the project, Christopher Smith, also expressed concern that a propane export terminal would smudge the Portland brand, which it would. If this and all of the other projects the fossil fuel industry wants to ram down our throats go through, we might as well start calling ourselves the Houston of the Pacific Northwest. Next thing you know, instead of IPA and bicycles, it will be Lone Star and mechanical bulls. Yeee hah!

The passionate opposition to the terminal that was expressed at the hearing is exemplified in this testimony given by Climate Action Coalition organizer Lowen Berman:

Hello. My name is Lowen Berman, I reside in NE Portland. I come today to speak to you of equity. As you all know, the question of climate equity or climate justice has been raised by the City as a key concern when considering any and all climate related issues.

Climate justice, or injustice, refers to the reality that those least responsible for climate change, those who have least benefited from the carbon economy, are the people who are paying the highest price regarding the impacts of climate change. How does this issue manifest itself in relation to the Pembina propane terminal?

There can be no question that propane, when burned, adds to global atmospheric carbon and that the quantities of propane that will be shipped through this proposed terminal will add significantly to global carbon emissions. Nor is there any question that the sources of this propane would be fracked natural gas and, potentially in the future, tar sands oil. Nor is there any question that the profits derived from the sale of the propane will only add to the profitability of oil and gas extraction. And as anyone who has followed recent news from Asia must realize, in the years to come propane will not compete with wood and coal but rather with solar and wind.

So let us look at this project through the lens of climate justice or equity remembering that equity considerations do not end at the borders of Portland. If the terminal is built, who gets what?

The list of costs can go on and on. The lists of benefits is very short. Portland is being asked to sell its soul for a few pieces of gold. If you, as a sustainability commission, truly believe in equity and climate justice you must turn away from looking only at short term dollars and business as usual and start looking at Portland’s responsibilities to the welfare of our people and the rest of the world.

Thank you for your kind consideration of these concerns.

One would think all that, combined with the strange weather that is happening everywhere, would be enough to guarantee a unanimous PSC decision against allowing a fossil fuel project of any kind to move forward on Portland soil. But, for whatever reason, a few of the commissioners seemed to think the decision to take a principled stand against the project was beyond their job description and punted to City Hall.

And so, we must stop this insane, irresponsible, and immoral project there. It will probably be a few weeks before the decision goes to a City Counsel vote. We must let the City Commissioners know our opposition as early and as vociferously as possible. Their numbers are listed below.