On Tuesday, December 8th, activists will attend the State Land Board meeting in Salem to send a message to Oregon’s top elected officials about why Oregon should reject LNG.  Assemble at 9am outside the Land Board meeting, gather at 9:30 AM for a brief media event. 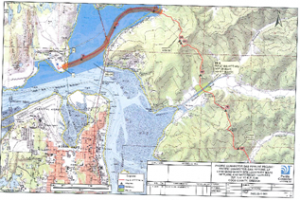 This map shows the proposed route of the Pacific Connector Pipeline Through Coos Bay’s Haynes Inlet. Pacific Connector seeks an easement through state-owned submerged lands for the pipeline from Oregon Department of State Lands.

The Land Board will not be taking public comment about LNG, which is not on the agenda.  However, we will send a message with our presence that the State of Oregon should use all of its authority – including its proprietary rights – to protect Oregon from destructive LNG projects.  Our attendance will also support local oyster growers and private landowners who will be traveling from Coos Bay to convey their concerns to the media and the Department of State Lands.

Together, we can persuade the State of Oregon to stand up for Oregonians against the largest, most destructive, and greenhouse gas-intensive fossil fuel proposal in Oregon.