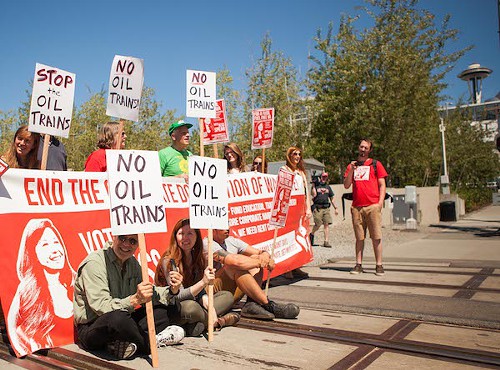 SEATTLE — July 31, 2014– Five protesters blocked railroad tracks through the city on Thursday.  Those participating in the bold action included Seattle City Council member, Kshama Sawant, and Jess Spear, a candidate for the State House of Representatives.

The aim of the occupation was to call attention to the proliferation of oil trains running through the streets of Seattle and the throughout the Northwest and the “near-miss” derailment of an oil train in Seattle last week.

Mr Spear was quoted by Seattle’s weekly rag, The Stranger, “These oil trains running right through the downtown area pose a huge risk to life and to the environment. Luckily, last week’s derailment did not spill any oil; but we cannot rely on luck. We cannot stand idly by while these bombs on wheels roll through Seattle”.

Ms Sawant told the Stranger she was at the protest “in solidarity with the three activists who have the courage of their convictions. It’s an enormous sacrifice to be arrested to raise awareness… I’m also here as someone who is on the city council and who takes the task of governance seriously. This is a matter of emergency that needs to be addressed”.

FOX News reported that Seattle Police first warned the protesters, then took three of them into custody.  Two men and Spear were detained.

According to FOX, “The trains have been a lightning rod for criticism from those who say they are both dangerous and part of an industry that is harmful to the environment”.

The occupation took place atop the tracks near the Olympic Sculpture Park along the Seattle waterfront.