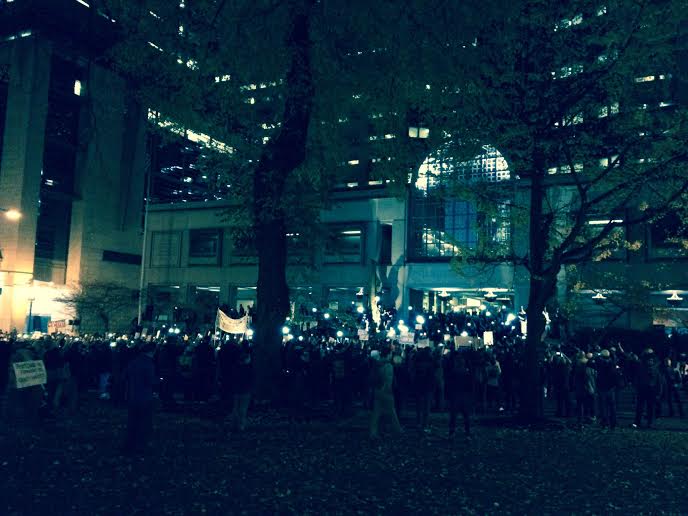 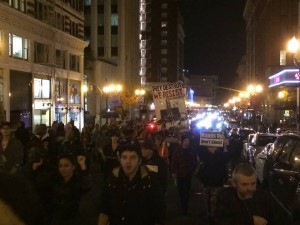 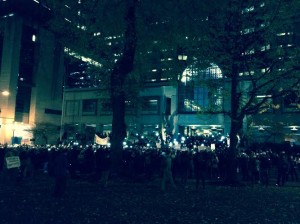 November 25, 2014 — Tonight Portland joined communities across the nation to express outrage at the Michael Brown verdict in Ferguson, Missouri and against the deep social inequities that enable police violence.   More than 2000 people gathered in front of the Multnomah County detention center for a peaceful rally held by a coalition of community organizations including the Albina Ministerial Alliance, the All African People’s Revolutionary Party, and the Urban League. Portland Rising Tide was among many community groups present in solidarity.  Protesters chanted “No Justice, No Peace” and “Hands Up, Don’t Shoot” as the rally turned into a well-orchestrated march through downtown.

Reflecting on community violence waged by police, it is important to note that despite the US Government’s proclivity for tracking statistics of every type, there is still no reliable national registry of police shootings or victims.  The Department of Justice  Arrest-related Deaths  database includes only self-reported information from about 750 law enforcement agencies1. Portland police shootings have been tracked by  Portland Cop Watch.  An emerging issue that has exacerbated police violence targeting communities of color2 is the increasing militarization of US state and local police.

After tonight’s peaceful protest, police deployed pepper spray and made seven arrests after a break-off group of protesters “snarled up traffic on Interstates 5 and 84 and gummed up passage on the Burnside, Morrison and Marquam bridges” according to the   Oregonian.

Rising Tide North America’s statement of solidarity with Ferguson can be read here.