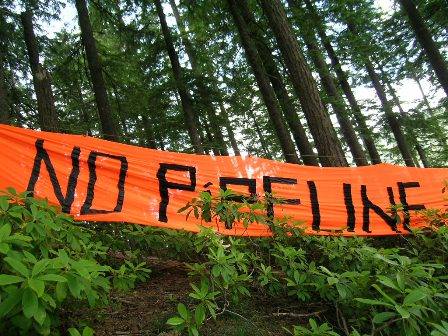 For the past decade, Oregon has faced numerous schemes to transport methane through proposed Liquefied Natural Gas (LNG) terminals and their related pipelines through our beloved forests, under our iconic rivers and watersheds, and across fertile private farms and fields. Ten years ago, corporate interests made a move to import LNG into Oregon by proposing terminals in both the north and south of the state – Oregon LNG near Astoria, Jordan Cove in Coos Bay and Bradwood Landing on the Columbia River. Over the next five years, resistance from a diverse coalition of landowners, environmentalists and climate activists culminated in then-Governor Kulongoski challenging federal approvals of Jordan Cove and Bradwood LNG. Both projects failed as LNG import terminals, and Bradwood LNG went bankrupt completely.

The specter of natural gas pipelines and LNG terminals, however, has not disappeared. The Jordan Cove project has returned, this time as a proposed LNG export terminal, and the Columbia River is still threatened by Oregon LNG which also hopes to export natural gas from the northern coast.

But never fear! Our communities are again rising up against fracked natural gas infrastructure and export.

Join us on Thursday, October 22nd for an info session on how you can get involved and give your body and soul to resisting LNG in Oregon. Learn about the plan for government collusion with corporate interests to ship explosive natural gas from fracking fields in the Rockies through fire-prone forests and earthquake-prone landscapes and threaten the climate, watersheds, and forests of our state. Hear about how we won against LNG, and how we will win again. Plug in to growing LNG resistance across the state, country and world.