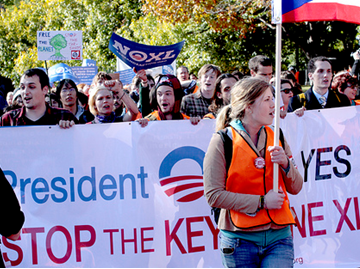 Yes, Keystone XL is horrible – but so are plenty of other fossil fuel infrastructure plans

–Architecturally, a keystone is the wedge-shaped piece at the crown of an arch that locks the other pieces in place. Without the keystone, the building blocks of an archway will tumble and fall, with no support system for the weight of the arch. Much of the United States climate movement right now is structured like an archway, with all of its blocks resting on a keystone – President Obama’s decision on the Keystone XL pipeline.

This is a dangerous place to be. Once Barack Obama makes his decision on the pipeline, be it approval or rejection, the keystone will disappear. Without this piece, we could see the weight of the arch tumble down, potentially losing throngs of newly inspired climate activists. As members of Rising Tide North America, a continental network of grassroots groups taking direct action and finding community-based solutions to the root causes of the climate crisis, we believe that to build the climate justice movement we need, we can have no keystone – no singular solution, campaign, project, or decision maker.

The Keystone XL fight was constructed around picking one proposed project to focus on with a clear elected decider, who had campaigned on addressing climate change. The strategy of DC-focused green groups has been to pressure President Obama to say “no” to Keystone by raising as many controversies as possible about the pipeline and by bringing increased scrutiny to Keystone XL through arrestable demonstrations. Similarly, in Canada, the fight over Enbridge’s Northern Gateway tar sands pipeline has unfolded in much the same way, with green groups appealing to politicians to reject Northern Gateway…

The “game over for climate” narrative is also problematic.  With both the Keystone and Northern Gateway campaigns, it automatically sets up a hierarchy of projects and extractive types that will inevitably pit communities against each other. ..Our work must be broad so as to connect fights across the continent into a movement that truly addresses the root causes of social, economic, and climate injustice. We must call for what we really need – the end to all new fossil fuel infrastructure and extraction. The pipeline placed yesterday in British Columbia, the most recent drag lines added in Wyoming, and the fracking wells built in Pennsylvania need to be the last ones ever built. And we should say that.

This narrative has additionally set up a make-or-break attitude about these pipeline fights that risks that the movement will contract and lose people regardless of the decision on them. The Keystone XL and Northern Gateway fights have engaged hundreds of thousands of people, with many embracing direct action and civil disobedience tactics for the first time. This escalation and level of engagement is inspiring. But the absolutist “game over” language chances to lose many of them. If Obama approves the Keystone XL pipeline, what’s to stop many from thinking that this is in fact “game over” for the climate? And if Obama rejects Keystone XL, what’s to stop many from thinking that the climate crisis is therefore solved? We need those using the “game over” rhetoric to lay out the climate crisis’ root causes – because just as one project is not the end of humanity, stopping one project will not stop runaway climate change…