Thanks to your support, the Unist’ot’ten Film Screening and Fundraiser on July 12 was a great success. Together, we raised over $1200 to support native resistance against exploitative industry and the Pacific Trails Pipeline.  Thanks especially to our speakers for the evening, tribal elder Cathy Sampson-Kruse of the  Confederated Tribes of the Umatilla and activist  Heather Olson of the Unit’ot’en Camp Resistance. 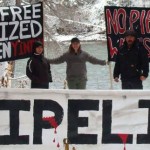 The screening took place at a time of critical need as the Unist’ot’en Camp is under threat of eviction by the Canadian state.

The Unist’oten’s Call to the Land is a short documentary that was filmed in the summer of 2013 on unceded Wet’suwet’en territory, 1000 km north of Vancouver in northern BC (western Canada) over the duration of the fourth annual Environmental Action Camp, hosted by the Unist’ot’en (C’ihlts’ehkhyu/Big Frog) Clan.

The focus of the film is on the Camp as a year-round resistance to exploitative industry, and what it represents in relation to indigenous sovereignty and the environmental, legal, and social issues surrounding pipeline projects in British Columbia. The short film documents one of the most important resistance camps in North America at this time.