Rising Tide is an international, all-volunteer, grassroots network of groups and individuals who organize locally, promote community-based solutions to the climate crisis and take direct action to confront the root causes of climate change.

Portland Rising Tide does combine long-term strategic campaigning with educational events to raise awareness and build capacity in our community to stop the plunge into climate chaos.

The Portland chapter of Rising Tide has existed for about six years, and in that time we have been instrumental in the battle to keep LNG out of Mount Hood. We have teamed up with student groups to expose banks that fund mountaintop removal coal mining. We have joined with groups such as Columbia Riverkeeper, The Indigenous Environmental Network and the American Indian Movement to protect the Columbia river from becoming another industrial highway to ship tarsands equipment. We have held teach-ins, movie screenings and workshops ranging from urban bee keeping to road blockades.

Rising Tide is an international, all-volunteer, grassroots network of groups and individuals who organize locally, promote community-based solutions to the climate crisis and take direct action to confront the root causes of climate change. In Canada, the United States and Mexico the network is facilitated by Rising Tide North America.

Rising Tide was born out of the conviction that corporate-friendly “solutions” to climate change will not save us and that most government efforts are half-measures at best. We organize through decentralized local groups that support one another with shared resources, ideas, fundraising, training and collaborations. Our activities include grassroots community organizing, publishing educational materials, organizing creative direct actions and protests, and holding public education events in order to further the struggle for climate justice.

Rising Tide is committed to stopping the extraction of fossil fuels and preventing the construction of new fossil fuel infrastructure. Equally important, we must make a just transition to sustainable livelihoods that foster local autonomy and self-sufficiency.

Rising Tide’s tactics are diverse and creative, taking a bottom-up approach to connecting the dots between colonialism, corporate power, climate disruption, social justice, and biocentrism. The systems that are destroying the planet are systems rooted in oppression; combating climate change is therefore not just a matter of carbon emissions, but of confronting the institutions that destroy communities, cultures and the Earth. The international Rising Tide network now spans four continents. We know that whatever we achieve in our local struggles is amplified by the energy of the growing global movement for climate justice.

Climate change demands that we ask what kind of world we want to live in, and is as much a social issue as an environmental one. Everywhere in the world, low-income, politically marginalized communities—historically those least responsible for CO2 emissions—are also those hardest hit by climate change and every aspect of the energy industry, from toxic pollution to resource wars.

We aim to support communities in making a “just transition,” in which social and ecological needs are prioritized in the shift to a low-carbon society. This means opposing policies that cause collateral damage to communities or strengthen existing inequalities. Real solutions to climate chaos are local in nature and come from communities themselves, not from the institutions that got us into this mess.

Climate justice is more than just a goal; it’s a practice in the movement against climate chaos. No effort to create a livable future will succeed without the empowerment of marginalized communities and the dismantling of the systems of oppression that keep us divided.

Originally formed internationally in 2000 to coordinate radical action in relation to the UN Conference of Parties climate talks in the Hague, Netherlands it had these original demands:

Rising Tide North America (RTNA) is a decentralized network of groups and individuals organizing against the root causes of climate change.

We are committed to Earth-centered, community-based solutions to the climate crisis that foster local autonomy and self-sufficiency. We are part of the global movement against climate chaos and for social and environmental justice. We believe climate change can only be addressed by exposing the intersections between the oppressions of humans and the earth. The “natural” disasters caused by climate change amplify the injustices inherent in a capitalist, racist, and patriarchal society; we must respond to these disasters in ways that do not continue that oppression.

We do not believe that the dominant, business-friendly means of addressing climate change will have any significant impact preventing catastrophic global warming. Market-based “solutions” like carbon offset schemes – whereby corporations are allowed to profit from their “sale” of greenhouse gas pollution – create social and ecological problems of their own, and serve to reinforce the same unsustainable system that got us into this mess. Power hungry politicians, communities disconnected from each other and the planet, and an economics based on money making and careless consumption are fundamentally at odds with the concept of environmental sustainability.

We reject the weak, corporate-designed and oriented half-measures in the Kyoto Protocol such as carbon trading and the “Clean Development Mechanism”. Kyoto, with it’s seriously insufficient goal of 5.2% emissions reductions, has become a distraction rather than a solution. Scientists have estimated that even a 70% reduction in emissions by 2050 would result in a devastating 3.6 degree F. change. CO2 levels must be reduced as dramatically and quickly as possible. To this end, we believe in an immediate end to all new fossil fuel exploration and extraction, and a just, rapid transition away from the burning of fossil fuels.

We also reject nuclear energy and dams; these unsustainable mega-projects often result in the devastation of local bioregions and the displacement of both their natural and human communities. Rather, we advocate a drastic increase in energy conservation and support a transition to clean energy sources such as wind, solar, and micro-hydro power.

Tragically, many of the most well publicized and funded green initiatives are being directed by the very companies most responsible for carbon emissions, most guilty of environmental problems and fossil fuel related social injustices, and with the most to gain financially by stalling any large-scale transition away from a fossil fuel-based economy.

Any hope for a livable future rests not with these companies, but instead with communities organizing themselves to take control of their lives and their land, and with finding more simple ways of living in which we are not dependent upon the highly centralized industries that are destroying the Earth’s life-support systems as well as more sustainable and traditional cultures. In addition to challenging the root causes of climate chaos, we actively support these real and viable solutions.

Ecosystem preservation, recovery and restoration is essential to sequestering carbon and curbing the exponential rate of species extinction. Our agricultural systems also must be made to work more in harmony with the Earth’s systems; it’s time to abandon industrial agriculture in favor of small-scale, local food sources. 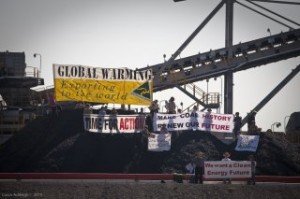 We believe in a movement-building model that is inclusive, participatory, decentralized and democratic. We strive to integrate these principles into our organizing and decision-making process.

RTNA is committed to keeping environmental racism and the struggle for environmental and climate justice in the forefront of our thought and actions. The people hardest hit by climate-induced natural disasters have been and will continue to be those most disenfranchised by our society and least responsible for the emission of greenhouse gases: the poor, women, and people of color. RTNA is committed to challenging all forms of oppression.

RTNA supports direct action and encourages individuals and organizations to carry out autonomous actions that are in line with these principles, whether it’s directly obstructing the fossil fuel industry or establishing grassroots solutions to climate change like permaculture gardens and community-run bike shops.  People and groups do not engage in property destruction under the name Rising Tide.  Rising Tide does not advocate or engage in sabotage, acts of violence, or destruction.

All Rising Tide groups should organize in an anti-oppressive and empowering manner with regard to race, class and gender. Groups using the name Rising Tide do not engage in sabotage or acts of violence.